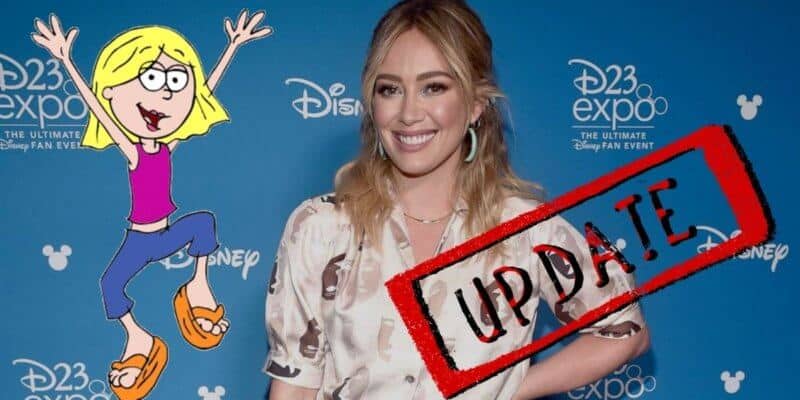 The Lizzie McGuire reboot has been on and off ever since it was first announced in 2019. Earlier this year, we reported that Hilary Duff suggested the Lizzie McGuire reboot was not exactly “family-friendly” enough for the Disney streaming service. Similar to why the Love, Simon series — Love, Victor — was moved to Hulu, it looks as though that is the same reason why the original show creator was also taken off the project — For “family-friendly” reasonings.

Also earlier this year, we reported that Duff spoke out about the possibility of the Lizzie McGuire reboot moving to Hulu as well as her thoughts and reasoning behind the show saying “I feel a huge responsibility to honor the fans’ relationship with LIZZIE who, like me, grew up seeing themselves in her. I’d be doing a disservice to everyone by limiting the realities of a 30-year-old’s journey to live under the ceiling of a PG rating.”

Hilary Duff recently spoke with POPSUGAR on not only her dedication to the Lizzie McGuire reboot but also where she and Disney stand on production.

As we all know, Duff is extremely connected to her Lizzie character and she will continue to fight for Lizzie. “I feel like it’s our responsibility to honor the fanbase that grew up with her and where they are now,” she told POPSUGAR.

Duff made it known that Disney is still “really excited” about the Lizzie McGuire reboot (as is she) and the company is “dedicated to making it work”. However, due to the current global pandemic, everything will remain on pause for now.

Not too long ago, the Lizzie McGuire cast got together via Zoom as they reminisced during a table read. “All of us were just giggling, couldn’t stop laughing,” Duff said. “And obviously there’s the play of a Zoom call so we’re all stepping on each other’s toes.”

“I think all of us feel really appreciative to be a part of something that was so impactful to others,” she continued. “And there’s a love there that will never go away. So hopefully, we’ll get to all experience whatever that new version looks like.”

When Duff announced Gordo would be returning to the series, the Internet went crazy! “Gordo was an essential piece of the puzzle to what made the original Lizzie McGuire so authentic and beloved. I couldn’t imagine the series without him,” said Hilary Duff. “I can’t wait for fans to see what he’s up to 15 years later and how he fits into Lizzie’s adult world,” Duff continued.

Related: Watching ‘Lizzie McGuire’ As An Adult Brings New Perspectives And Here’s Why

Do you want to still see the Lizzie McGuire reboot? Let us know your thoughts in the comments.

Comments Off on Hilary Duff Gives Another Update on ‘Lizzie McGuire’