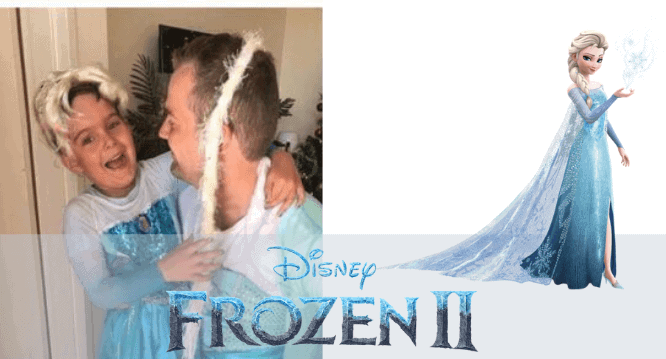 This is the kind of Dad I’d like to be when I get around to having kids.

Why Scott Stuart chose to wear the Elsa dress

36-year-old Scott Stuart didn’t choose to freak out when his six-year-old son Colin fell in love with all things Princess Elsa. The adorable little kid loves everything about Disney’s Frozen, and in a move that defies gender norms, his Dad chose to wear matching dresses to go and watch Frozen 2.

The video quickly went viral as an example of a Dad and Son with a loving and understanding relationship that defies traditional ideas of masculinity and gender stereotypes.

Poor little Colin was repeatedly told by classmates that Frozen, Princess Anna, and definitely wearing an Elsa costume were not things that a boy should be interested in. Stuart remembers Colin coming home distraught because he was told that Elsa ‘was for girls’.

‘That day I resolved that I would always support the things that he loves, even if they challenged my (or society’s) expectations of him … Since then he has loved a whole lot of traditionally male characters like Batman and Spider-Man, but his favorite characters are princesses and queens like Elsa, Anna, Belle, and Rapunzel.”

Colin became worried about wearing a costume to a screening of Frozen 2, fearing that people might laugh at him. Well Scott decided that this was ridiculous, and to show solidarity with his son, he bought an adult-sized Elsa costume and Dad and son went to the movies together, both dressed as their favorite Disney princess.

The video has since gone viral on social media as an example of a child being encouraged to be who they are. Just look at Colin’s radiant smile in pictures and the viral video below. That is one happy kid.

We’ve come a long way since the days of dolls for girls and trucks for boys. Nowadays, parents are encouraged to let their kids enjoy any character, song, film, or toy that makes them happy. Frozen (and Frozen 2) is a phenomenal movie; why should it be appropriate for one gender only because it stars a princess?

What do you think about this Frozen loving Dad and Son? Have you ever worn a dress to make your child happy? Let us know in the comments below.