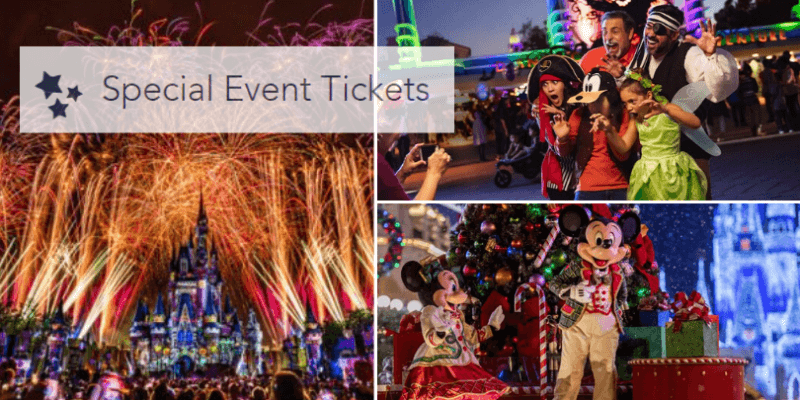 This article has been updated since it was originally published to include the most recent information from Disney.

As upcoming Disney Parks guests look forward to their fall and winter trips to Walt Disney World Resort and Disneyland Resort, they are wondering whether special ticketed events are going to change this year. Based on the health and safety measures currently in place at Disney Springs and Shanghai Disneyland — and with the measures Disney has planned for the Disney World theme parks — here is how special events at Disney Parks in the U.S. could change in 2020.

At the time of this article’s publication, Disney has not shared that they are canceling any hard ticket events that are currently scheduled for fall and winter 2020. However, many special event tickets for the summer have already been canceled (view Disney’s latest update here).

The second annual Disney California Adventure Halloween party, Oogie Boogie Bash, is still advertised on the Disneyland Resort official website, although the dates have not been published and tickets are not yet on sale.

Tickets have already been on sale for Mickey’s Not-So-Scary Halloween Party at Magic Kingdom is currently being advertised on the Disney World website as running on select nights from August 13 to November 1, 2020, although now, Disney has announced that all tickets (including Halloween party tickets) are on pause for the time being. However, Disney stated that the party is still on and already-purchased tickets are still valid.

Tickets are not yet on sale for Mickey’s Very Merry Christmas Party at Magic Kingdom, which on select nights runs from November through December. Tickets for that event typically go on sale in April, and while we caught a glimpse of the dates on the website, they were later removed that same day.

Many upcoming guests were also holding out hope for this August’s special event at Disneyland — Star Wars Nite on August 27. The event has been sold out for months and will offer out-of-this-world experiences honoring a galaxy far, far away. However, Disney has just recently announced Disneyland After Dark: Star Wars Nite has been officially postponed, and the rescheduled date has not yet been announced.

When it comes to these events as well as other ticketed events at the Disney Parks, right now it’s unclear how Disney will proceed with them. However, you can visit the official websites to view special event information as it is currently published for Disneyland Resort and Walt Disney World Resort.

Related: If Disney Resort Hotel Capacity is Limited Upon Reopening, Would You Stay Off Property?

Will Less Tickets Be Sold?

Special events at the Disney Parks already offer the amazing benefit of getting to experience the theme park with much lower crowds. But with health and safety measures in mind, will Disney opt to sell even less tickets and cap capacity even lower than they normally do on special event nights? Right now, it sounds like a possibility. However, as long as capacity for these special events never reaches more than the capacity the Disney Parks will operate at, then Disney may not even need to sell less tickets than usual.

An interesting thing to consider this year, however, is that booked experiences and tickets to not guarantee admission when the parks reopen. When it comes to the Halloween and Christmas parties as well as other special ticketed events, admission may not be guaranteed even if you purchase a ticket. Disney released a statement recently that said they may need to make “real-time adjustments” to experiences and tickets.

As we continue to follow guidance from government and health care officials regarding how we’ll be able to reopen our parks and resorts in a responsible way, we may also need to make real-time adjustments to booked experiences, park tickets and park passes.

Please know that if any reservations you may have made need to change, we will work with you to make the necessary modifications.

Keep in mind that Disney has not said that tickets for the Halloween or Christmas parties have been canceled or adjusted yet.

Related: Why You Should (or Shouldn’t) Book a Disney Vacation for 2020

Will Social Distancing Measures Affect Entertainment and Characters at Events?

Shanghai Disneyland reopened only a few weeks ago, so it has provided a model for how Disneyland and Disney World will handle reopening, as Bob Chapek has stated previously. The park is currently offering limited entertainment with social distancing, modified character meet and greets in which you can only wave to characters from a distance, and no fireworks shows.

Disney also made the announcement that once the Walt Disney World Resort theme parks reopen, they will not offer any character meet and greets, fireworks, or parades. It’s not yet clear how long these measures will last, so right now we don’t know what events like Mickey’s Not-So-Scary Halloween Party will look like this year.

There are a number of ways that Disney could still offer all of the entertainment at the Halloween and Christmas parties, if things change in a few months. Shanghai Disneyland began offering shows in front of Enchanted Storybook Castle. During the shows, guests have to stand inside designated areas with only their travel party, and they are separated from other guests around them by six feet. This could be implemented for Disney Parks shows in the U.S. — or even during parades, as markers for where to stand can be placed along the parade route — although it would be difficult to enforce at night during a fireworks show or performance.

But it is unlikely that character meet and greets will be offered in the same way they were at these events in years past, especially since Disney already said that the Disney World theme parks will reopen in July without any character meet and greets. There is a chance Disney will have characters interacting with guests from a distance, much like the immersive treat trails were at Oogie Boogie Bash last year, in which guests had the opportunity to wave to and chat with Disney characters while walking through a trail to get candy. The characters put on over-the-top performances and the entire experience was unique. So it is possible that (as long as guests maintain social distancing) this could be an option.

Remember that Disney has not yet confirmed how special events will change.

How do you think special events will change after the parks reopen? Will Disney have to further adjust how special events are operated because of new health and safety protocol? Let us know your thoughts in the comments.