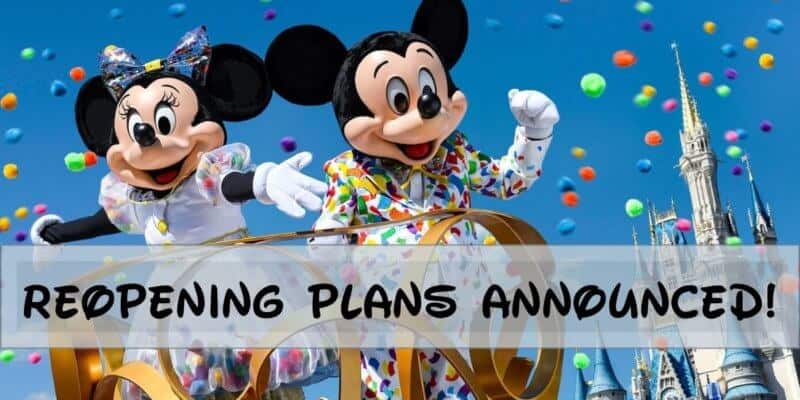 Here is everything we know about Walt Disney World’s reopening plans from the Economic Task Force meeting which took place on May 27:

Jerry Demings began the meeting by saying, in regards to the Orlando theme parks presentations, “I have had the opportunity to preview the presentations and I really look forward to the dialogue to the entire body today as we move forward.” We also wanted to note that Thomas Mazloum, Senior Vice President of Walt Disney World Resort, was present during the OC Task Force Roll Call.

Jim MacPhee, Senior Vice President of Operations of Walt Disney World, then had his time and gave the reopening presentation. He began by stating that Walt Disney World Resort theme parks will begin a phased reopening for Magic Kingdom and Animal Kingdom on July 11 with ECPOT and Disney’s Hollywood Studios on July 15. Cast Member previews will take place days before reopening to the public.

MacPhee then went on to discuss the health and safety protocols which includes physical distancing, enhanced cleaning, enhanced protective measures, temperature and health screenings, as well as limited-contact enhancements.

He also stated that fireworks, parades, and other similar entertainments would be paused so they can continue to manage crowds. Disney will be expanding their mobile order process across more food locations to help with contactless pay and to avoid crowds.

Disney will also be utilizing the new social distancing team of Cast Members across all of the theme parks. This team will be used to engage with guests as well as make sure that social distancing guidelines are followed in queues and in popular areas of the Walt Disney World parks.

Disney World will also post health and safety signs to ensure that guests have a clear understanding of the protocols Disney asks them to maintain throughout their experience at the Walt Disney World Resort.

In an official Disney statement from Disney Parks News noted that due to theme park capacity Disney will manage their attendance through a new theme park reservation system which will require all guests to have a reservation in advance in order to be allowed into the park. Disney also stated that existing ticket holders and Annual Passholders will be able to make reservation requests in phases before new tickets are sold. Disney will be reaching out to these guests with additional details.

Once these phases are complete, then Disney will resume new ticket sales and hotel reservations after that period of time. Theme park reservations will be limited due to attendance limitations and will be subject to availability. More details on the new reservation system will be available soon.

Additionally, Disney announced that Disney Vacation Club resorts at Walt Disney World will begin to reopen to members and guests along with Disney’s Fort Wilderness Resort & Campground beginning on June 22.

Information On Other Disney Parks and On Disney Springs

At this moment, the only Disney Park in the world that has officially reopened to the public is Shanghai Disneyland, which opened its gates on May 11. Disney Springs at Walt Disney World Resort also began its phased reopening on May 20.

If you plan on visiting Disney Springs, there are a few safety protocols that must be followed. Here are some things you may want to keep in mind before heading over:

Are you excited to hear this news from Walt Disney World Resort? Let us know in the comments.