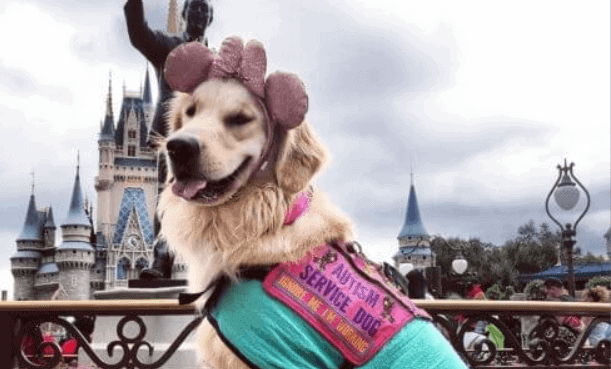 Thanks to the obedience, alertness and sweet spirit of some very intelligent canines, many Americans with mobility limitations, blindness, Autism, hearing loss, emotional disorders, depression, and other conditions have found comfort, assistance and a renewed approach to life.

Service animals are tasked with multiple responsibilities. Sometimes, they are the seeing eyes for a person with low vision. Some animals play a role in reminding their owners when to take medication. And others bring a comfort to their owners that can’t be found in other ways. Service animals make life possible–and enjoyable–for thousands of people everyday.

Nala is a beautiful dog (just look at her photos!) who has many responsibilities when it comes to her owner, Megan Leigh. Megan says she’s always loved Disney, but once upon a time her health stood between her and a fun day in the parks at Walt Disney World.

“Now I can go to Disney and enjoy myself because Nala helps me be more independent,” Megan said.

Megan isn’t the only fan of Disney. Nala’s very namesake comes from Disney’s “The Lion King.” She is named after Simba’s friend who one day becomes his queen.

This furry friend is a huge fan of the People Mover in Tomorrowland at Magic Kingdom. Megan says it’s because Nala loves the feeling of the wind against her soft face. Service animals are permitted to enjoy rides with their handlers at Disney World, so long as the ride doesn’t have a height requirement. (Nala isn’t quite tall enough to ride Rock ‘n’ Roller Coaster at Hollywood Studios!)

She’s even been known to blast off aboard a space rocket at Tomorrowland’s Astro Orbiter attraction, though not alone, of course.

Rides aren’t the only things Nala loves about Disney. She loves princesses too, and she’s a bit of a celebrity in the parks!

“Many of [the princesses] recognize her because we are annual passholders,” Megan said of her pretty pup. “They always say ‘Hi Nala! It’s so good to see you again!'”

According to Nala, Cinderella is the go-to princess for the best tummy rubs, but Ariel is her favorite princess. The little mermaid always invites Nala to sit on her bench with her.

“We are best friends and a team! She helps me, I help her,” Megan said. “Balance is important in working dogs. That’s why I believe it’s so important that she gets to have fun at Disney, too!”

Megan takes good care of Nala too. When they’re in the parks at Disney World, Megan is careful to make sure Nala is dressed for the weather. That includes a cooling vest in the summer and booties so her little paws aren’t burned on the hot pavement.

Want to see more about Nala’s trips to the Most Magical Place on Earth? Glad you asked! You can follow Nala’s Disney World adventures on Instagram.

Do you have a furry friend you bring to the Disney Parks as your service animal? Let us know in the comments!