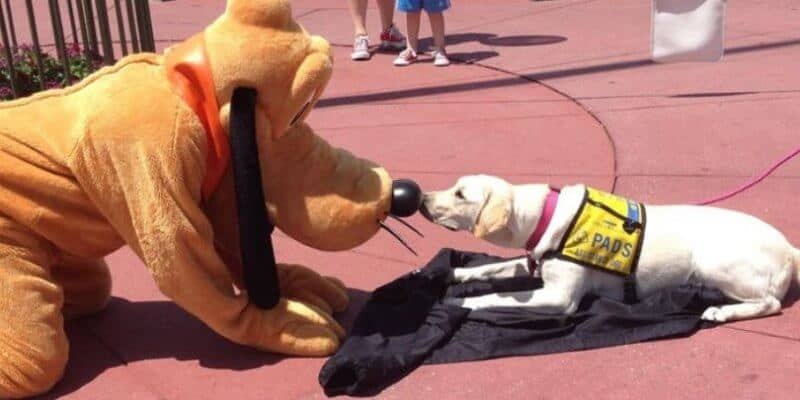 While you were out enjoying your vacation at Disneyland or Disney World, you may have spotted a guest with a dog in the park. Or, you may have been the guest that brought your dog to the park. Yes, special pups are allowed inside the Disney parks –Those dogs are service animals.

According to the American with Disabilities Act regulations, a service animal is defined as an animal that is trained to do work, or perform tasks, for someone with a disability. This includes physical, sensory, psychiatric, intellectual, or other mental disabilities.

And of course, Disney Parks is happy to accommodate the furry guest. “We value all our Guests with Disabilities and services animals are welcomed at most locations throughout Walt Disney World theme parks and Resort Hotels,” is the first statement on the Walt Disney World’s Service Animal page.

I'm gonna be the main event Like no king was before I'm brushing up on looking down I'm working on my roar ???

However, there are rules in place to secure the safety of the guests and of their furry companions. The owner must maintain the animal under control, and on a leash or harness, at all times. Disney Cast Members are not allowed to take care, watch or control your pet.

Services animals are not allowed on any water attractions, or water features and fountains, or closer than 4 feet to the water on a wet deck. Service animals at Walt Disney World parks are allowed to relieve themselves at any specified outdoor area as long as the owner picks up after the animal. On the Disney World Service Animal webpage, you are able to see a map with the exact location of those relief areas in each park.

For access to service animal relief areas at Disney parks, you can check one of the links below.

In regards to riding an attraction, guests at Disney Parks with service animals should follow the same attraction entrance as guests with wheelchairs.

Related: Woman Faces Scrutiny at Disney Parks for Service Dog That Helps Her Through Trauma

According to Disney’s policies, if you are at a park with your service animal and wish to go on a ride, you should ask a cast member about the available options; usually the Rider Switch option, or a portable kennel. These options are in place in some parks to secure the service animal’s safety.

For Disney Springs in Florida and Downtown Disney in California, similar rules apply, and like in parks, service animals are allowed in stores and in restaurants.

Here are the following attractions that service animals are allowed, or not allowed, to ride with their owners at Disney Parks around the world:

These are some rides that will accommodate your service animal, but always remember to consult with a cast member at the entrance of the ride.

my goal in life is to reach this level of happiness “@chesney_thegoldenboy Officially a rescue ranger ?? . . . . . . Let's talk about failure. A lot of the times everything people post about their service dog, is mostly positive. Which is nice and all, but personally I don't have a fully trained service dog. And we make mistakes, a lot of the times. I realize lately I have been more on the rainbow and butterflies kinda side, but the truth is Chesney messes up all the time. But you know what? Thats okay. I am so hard on him, because I see all these posts about dogs behaving perfectly, alerting naturally, and just being the perfect service dog. I know everyone says service dogs aren't robots. And that's true, but we don't ever see positive posts about messing up. It's okay if your dog gets frightened and let's out a bark or two. It's okay if they break their heel more than a few times. lts okay if they miss an alert. Because they are still learning. Chesney did great at Disney the other day, but he also greeted 2 people without my permission. He got excited and put his paws on chips lap. Wouldn't stop doing circles through mr. Incredibles legs. He broke his heel, I had to repeat commands multiple times. And probably more. But it changes nothing, because it's okay to make mistakes. Without them I wouldn't know what Chesney needs more work on. Failing is part of succeeding. You can't have one without the other, don't be afraid to share when something bad happens. I will try to post more about things Chesney has done wrong, but I will also focus on the positives as well. Did he put his paws on Chip? Yep, but he got right off and didn't do it to any other character. Did he greet someone without permission? Yep. But he came right back when Icalled him into heel. Did he continue to break his heel? Yep, but it was crowded, hot, and loud. And he came right back when asked. Mistakes are okay, as long as you're working towards fixing them. And working together as a team to be better. Don't be discouraged by others all positive posts, dont feel like you have to hide your dog is still learning. It's okay. We are all in the same boat. Just stick"

If you need further questions on the entrance of your Service Animal at Walt Disney World parks, you can contact the Walt Disney World Disability Services at (407) 560-2547, or through email at disability.services@disneyparks.com.

Service animals are restricted from the locations listed below.

For those with service animals wishing to go to Disneyland Paris, Disneyland Shanghai and Tokyo Disney, the same regulations mentioned above apply, yet here are some extra information you need to know, as well as the rides and attractions you service animal can accompany you in.

For Disneyland Paris, you have to make sure your service dog has all of its travel documents up-to-date — including proof of vaccination and a document indicating that your pet is a service animal — and present them upon arrival at the hotel and park.

Inside the park, service dogs are accepted at the following places:

The same rules mentioned above apply to Shanghai Disneyland. It is important to notice that Shanghai Disneyland offers the Rider Switch option to guests. Here is a list of the attraction that service dogs are allowed and not allowed.

As with Shanghai Disneyland, Tokyo Disney’s website does not provide information on relief area location, but it encourages guests to ask a Disney cast member in site for information.

Here are the ride and attractions at Tokyo Disneyland that service dogs can enter:

Remember these rules are regulations are in place to accommodate all guests — even the furry ones — to the happiest places on earth. It is crucial to follow them so everyone can enjoy a magical moment during their vacation!

If you have a service animal and have taken him/her to a Disney Park, please tell us your experience! We would love to hear it.