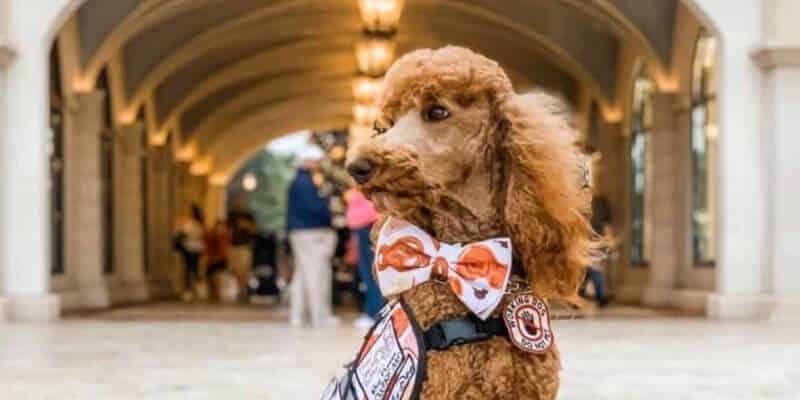 Jenn Bethune and her family were like any other Walt Disney World loving group. She and her husband Kyle, and their children Ethan and Ben loved a trip to what they always thought was the happiest place on earth, particularly for a ride on the Space Mountain roller coaster, Ethan’s favorite ride.

However, that all changed when a horrific accident occurred while the family was on their way to the theme park. A blown front tire of a truck caused the driver to lose control, plowing into the side of the family’s minivan. Jenn turned to find Ben with a cut, but tragically, Ethan wasn’t so lucky.

The anxiety of losing her son was so awful that Jenn found herself experiencing night terrors, while in the day the mere sound of an ambulance would give her horrific flashbacks.

However, she was able to find solace from an unlikely source; a service animal. A poodle called Theodore. Her furry friend instantly put her at ease when she received him as a puppy and she thought he would make an excellent support animal to help her through her trauma. This clever pet is able to ground her anxiety, giving her emotional support to reconnect with the world when thoughts spiral.

Theo is able to switch on lights and wake Jenn from a nightmare, before consoling her nose to nose. He also acts as a weighted blanket, helping to keep her feeling safe and to keep her anxiety at bay. For the first time since that horrific day, Jenn has been able to relax.

Jenn and her family didn’t stop going to Walt Disney World Resort, as instead of bringing back unhappy memories, it made them think of all the good times they shared with Ethan, particularly when riding Space Mountain. Of course, they now bring Theo along to the Animal Kingdom, Magic Kingdom, and any other park across Walt Disney World. The family takes Ben, now 9, and their two subsequent children Molly, 6, and Eli, 4, who love both the park and Theo.

However, Jenn says that the reaction isn’t always kind or welcome. Some park goers will simply assume that she’s pretending in order to get her dog into the park as many are ignorant of the need for service dogs. She told the Orlando Sentinel;

While some are friendlier, they can also try to pet Theodore, which is a big no-no for service dogs. Working dogs should never be touched while on duty. It is important for us all to remember that not all disabilities are physical. Service animals can be incredibly beneficial for sufferers of a range of mental health issues including autism and anxiety disorders.

Walt Disney World’s policy currently only allows service dogs into the park, so if you see one, please think of the situation of the owner. You can’t tell what somebody is going through, so please always be compassionate, and remember; a dog at the park is a working dog, so never touch it without asking first.

Do you know somebody with a service dog who has experienced similar issues to Jenn? Let us know in the comments below.