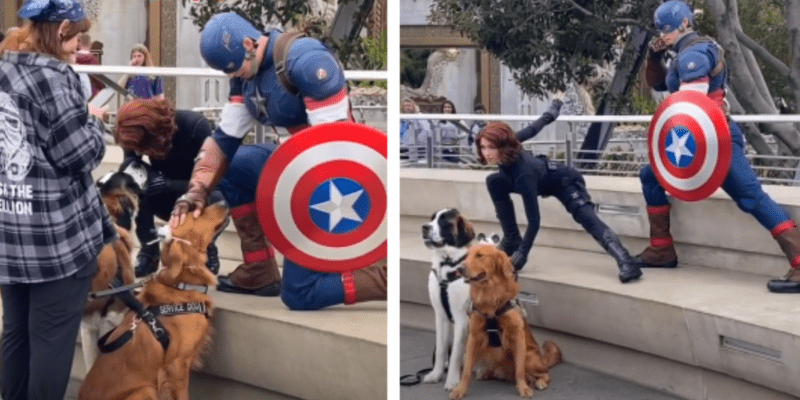 Disney character interactions are what make the experience unlike any other.

Though Walt Disney World Resort and Disneyland Resort are currently still only offering distanced meet-and-greets with characters, Guests who visit the Parks still have an opportunity to interact with characters.

TikTok user @boo.its.judy shared a recent interaction with Captain America and Black Widow where they met with two adorable service dogs and their owners at the Disney Avengers Campus in Disney’s California Adventure.

The above video was shared just a few weeks ago and has since received more than 245,000 likes. In the clip, we see both Captain America and Black Widow seemingly breaking character a bit and taking time to pet the service dogs at the Avengers Campus before ultimately getting back into their positions and posing for a picture. But, who could blame them?!

Here is what Disney Parks Blog says about the recently-opened Avengers Campus at Disney California Adventure:

During a visit to Avengers Campus at Disney California Adventure park, you can encounter an assemblage of Super Heroes, along with some of their friends and foes. Spider-Man flips high in the air above the WEB building. Ant-Man and The Wasp check in on the latest experiments using Pym particles. Iron Man shows off his new Mark 80 armor. General Okoye and the Dora Milaje arrive from Wakanda to train recruits, and Doctor Strange steps through a mystic portal and into an Ancient Sanctum.

If you have a service animal and have taken them to Universal or a Disney Park, please tell us your experience! We would love to hear it.