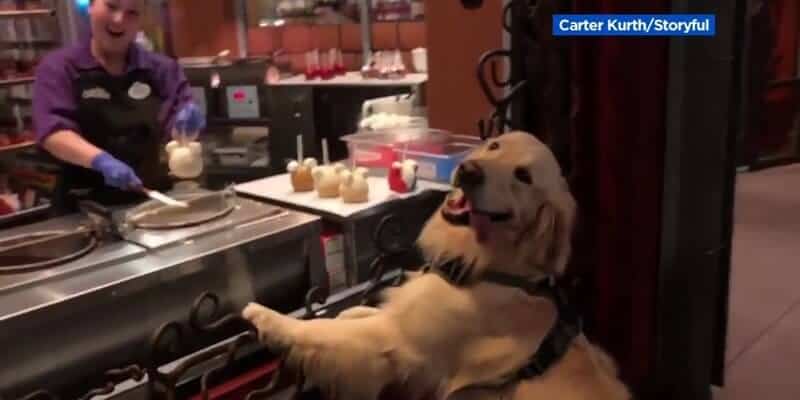 We love seeing dogs at Walt Disney World almost as much as we love trying all the amazing treats at Disney Parks. And apparently, one golden retriever recently wanted to try some amazing Disney desserts, too. We just came across this video of an adorable dog drooling over a Disney Cast Member making candy apples at Disney Springs, and we can’t get over this pup’s cuteness.

Dallas, a golden retriever who visited Walt Disney World recently with his owner, Carter Kurth, stopped outside the Candy Cauldron at Disney Springs to watch some Disney magic. If you’ve ever been to a Disney Park, you know that the Cast Members take their desserts very seriously. Any Disney fan with a sweet tooth can agree that one of the most magical experiences is watching Disney desserts being created before we get to try them for ourselves. And apparently, Dallas the golden retriever wanted a taste of some Disney candy apples just as much as any fan would.

In the video Dallas’s owner, Kurth shared on social media, viewers can see the pup put his paws on the storefront window to take a closer look at the sweets being handcrafted. The dog’s tongue is hanging out of his mouth and he appears to have the biggest smile on his face. It turns out pups like Dallas can hardly resist Disney sweets just like us!

We don’t blame Dallas for wanting a taste of pixie-dusted Disney treats while visiting Disney Springs. We’re drooling just thinking about all the amazing candy apples you can buy at Walt Disney World!

What do you think of this adorable golden retriever Dallas and his eye for Disney sweets? Let us know in the comments!