Disney World Food Is a Nightmare, According to TikTokers - Inside the Magic 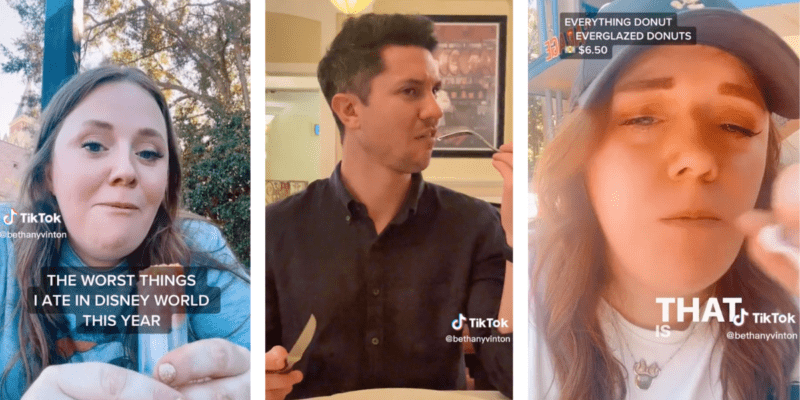 In November 2021, we reported on an unpopular comment from The Walt Disney Company CFO, Christine McCarthy, during a quarterly earnings call. After announcing that Walt Disney World Resort and Disneyland Resort would cut food portion sizes to save money, McCarthy said the change would be “good for some people’s waistlines.”

Many Disney Parks fans were offended by these comments. Fans have already noticed decreased portion sizes at Disney Parks, and some report declining food quality as prices increase.

As 2022 came to a close, self-proclaimed Disney Foodies and “Professional Eaters” shared the worst things they ate at Walt Disney World Resort last year. One of those Disney food experts is TikToker Bethany Vinton (@bethanyvinton):

In fifth place is the Hades Hot Dog, available at The Friar’s Nook in Magic Kingdom during Mickey’s Not-So-Scary Halloween Party. “First off, it has violet mustard on it; why? Second off, the whole thing was offensively spicy,” Vinton said. “And third, the relish was just disgusting.”

For the fourth-worst of 2022, Vinton admonished all food offerings at H2O Glow Nights at Disney’s Typhoon Lagoon Water Park. “Everything was dry. They tried to tie-dye things,” Vinton recalled. “It was a mess.”

“Number three is very specific, but it was the mushrooms that accompanied the beef at this $195 meal at Monsieur Paul,” Vinton said. “These tasted unbearably metallic-y like you were getting a filling.”

At the second worst spot was the Everything Donut from Everglazed Donuts at Disney Springs: “Who thought of this and why? It was horrid.”

Last and definitely least was the Salmone Alla Siciliana from Tuscany Holiday Kitchen in the Italy World Showcase Pavilion at EPCOT International Festival of the Holidays.

“This is salmon tartar in, honestly, a push pop,” Vinton said. “Everything about this disturbed me. 0/10. Whoever created this should be in jail.”

Have you tried any of these Walt Disney World food offerings?

Comments Off on Disney World Food Is a Nightmare, According to TikTokers