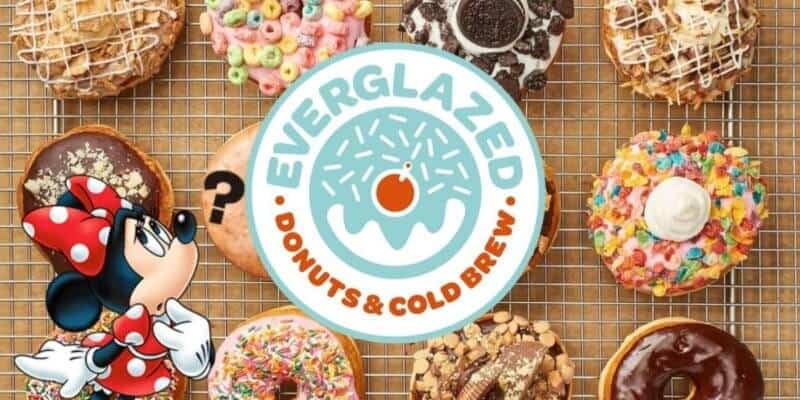 Disney Springs is home to several shops on property that are all guaranteed to satisfy that sweet tooth of yours. From cupcakes at Sprinkles to rice krispies and cake pops at Goofy’s Candy Kitchen, Disney Springs has got you covered. The Walt Disney World shopping, dining, and entertainment district has just added additional shops to the list — a one-of-a-kind specialty donut shop just debuted!

Everglazed Donuts & Cold Brew officially opened its doors on Wednesday, January 6, 2021, and ever since Guests have been pouring in wanting to try every donut in sight! From Peanut Butter Explosion to Oreo Surprise to Cinnamon Toast Crunch, Everglazed Donuts has a variety of unique flavors, perfect for every taste.

In case you aren’t familiar, Disney Springs describes this newly opened shop as:

Enjoy a warm, handmade donut and a refreshing cold brewed coffee in a classic donut shop where “Happiness is Glazed Daily!”

Discover hand-crafted confections featuring mouthwatering yeast and cake donuts with an assortment of cold brew pick-me-ups and a few sweet-yet-savory sandwiches. Immerse yourself in a complete donut experience as you gaze through the windows of the Everglazed working show kitchen where the humble donut is fried, glazed and piled high with a rainbow of toppings.

It’s obvious these donuts are very eye-catching (and I mean, they do say we eat with our eyes). But I wanted to know if these donuts were really as good as they looked so I decided to head to Disney Springs and try it out for myself — here’s what I found.

The first donut I really wanted to try was the Fruity Pebbles Donut which is iced with strawberry-flavored icing and then coated in actual Fruity Pebbles cereal and some whipped cream. Overall, I was pleasantly surprised with all good this donut really was. I was afraid it was going to be overly sweet; however, I found it wasn’t as bad as I expected. With that being said, I still could only eat one-quarter of the donut in one sitting. I ended up saving it for breakfast the next morning!

Though this one I also saved for the next morning before I took a bite and unfortunately, the Cinnamon Toast Crunch pieces were a bit soggy at that point; however, the donut still tasted delicious overall.

Not only did I try two different donut flavors, but I also decided to try one of the famous cold brews while there. I wanted to try the Cinnamon Bun Cold Brew. But unfortunately, the shop ran out of the Cinnamon Bun syrup so I opted for the Vanilla Hazelnut Cold Brew instead and I must admit, it did not disappoint.

I am a huge cold brew lover so I went in with high expectations and it was delicious. The Vanilla Hazelnut syrups weren’t overly sweet and the coffee flavor was strong. I would certainly get this again.

My Piece of Advice

Go early! I went to Disney Springs after the theme parks and after I grabbed some dinner, and I didn’t get to the shop until about an hour before closing. Because of this, they did not have all of the donut flavors nor did they have all of the coffee syrups. If you have your heart set on a specific type of donut or coffee and want to make sure it will be in stock when you arrive, I highly suggest going earlier in the day to ensure they will be available.

Do you want to try a donut from Everglazed Donuts? Start planning your Disney World vacation today!

Comments Off on Is Everglazed Donuts as Delicious as it Looks?