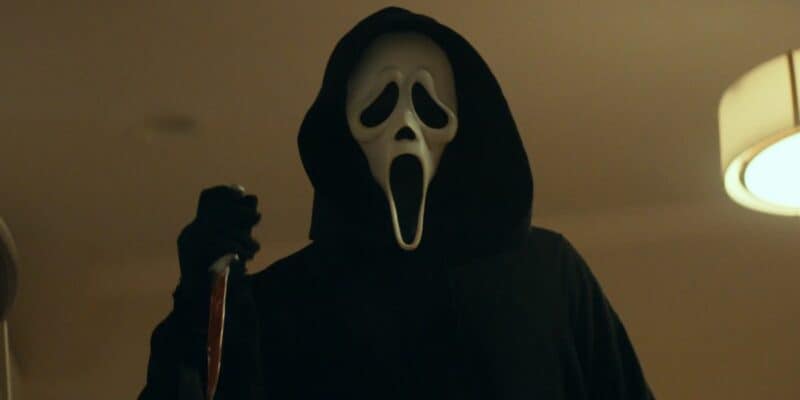 As we get closer to the release of Scream VI (2023), it’s reasonable to expect the film’s marketing to be ramped up. And now, just days after sharing a Christmas-themed poster of Times Square in which Ghostface is haunting all the billboards, the official Scream Twitter account is at it again.

Bizarrely, the new image is a New York City Subway map in the shape of the iconic Ghostface mask, while each “route” represents one of the six Scream movies, as indicated by the colored symbols on the top left of the image.

As you can see, the “stations” along these “routes” are named after both the identities of the Ghostface killers and their many victims. However, one station is named “Sam Carpenter” (Melissa Barrera), a survivor from Scream (2022) and the illegitimate daughter of original Ghostface killer Billy Loomis (Skeet Ulrich).

The second one is “Kirby Reed” (Hayden Panettiere) on the orange line (Scream 4), which is actually marked as an “x”. This is likely to do with the fact that the character was believed to have been killed by one of the Ghostface killers in Scream 4 (2011). Now, Panettiere is reprising her role as Kirby Reed in Scream VI.

But what does any of this mean? Is Sam Carpenter going to become another Ghostface victim? And how has Kirby Reed come back from the dead? We don’t have to wait long to find out, but for now, as the symbols at the top of the poster state, the latest ride in the Scream franchise is currently “under construction”.

Actress Jenna Ortega, who plays Tara Carpenter in Scream (2022) and Scream VI, recently said that the upcoming film will “distract” viewers from Neve Campbell’s absence, but it looks like the filmmakers have already made a headstart.

What do you think this bizarre new image means? Let us know in the comments down below!