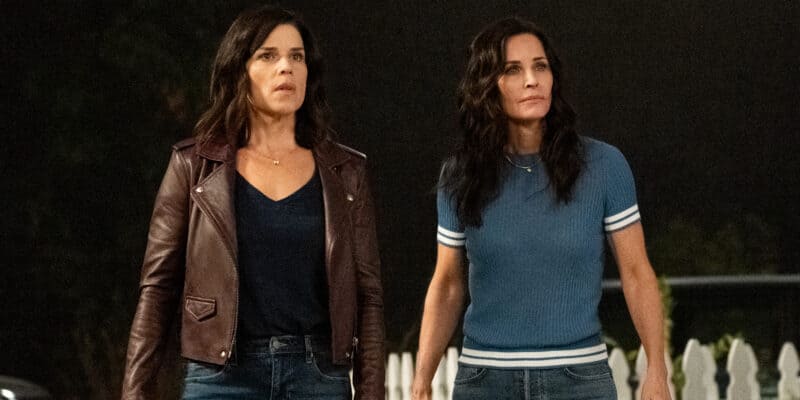 Scream 6 (2023) has dominated headlines lately, and not because it’s a highly anticipated sequel, but rather that Neve Campbell, who has played “final girl” Sidney Prescott in all previous five Scream movies, exited the project over a salary dispute.

Since announcing her exit, Neve Campbell, 48, has opened up about her feelings on having to cut ties with the upcoming sequel, while also addressing rumors that she will be reprising her role as Sidney Prescott in the film.

However, her exit didn’t stop her from reprising her role Sidney Prescott in a tongue-in-cheek Red Cross campaign ad on Instagram posted by Scream fan site Hello Sidney. And now, yet another veteran actress has exited Scream 6 — but not in the way you might think.

Courteney Cox, who plays Gale Weathers in all the Scream movies, has announced via Instagram that she has finally wrapped filming Scream 6. But the announcement comes in the form of a shocking video with some unapologetic tongue-in-cheek humor.

At first, Courteney Cox’s video appears to be legitimate. “Just finished filming Scream,” she says to the camera. “Back from Montreal and I’m so happy to have my work behind me.” But then, in a shocking twist, she catches sight of a Ghostface killer on her security cameras!

Could this simply be some viral marketing, or is there more than meets the eye here? Well, we’re inclined to think it might be the latter, as Cox is the first cast member from Scream 6 to have finished filming — or at least she’s the first to have announced it. But what could this mean?

We’ve all spent a lot of time talking about Neve Campbell’s exit, but what will now have Scream fans worried is Courteney Cox’s seemingly early wrap on the upcoming sequel. Is it possible that her character Gale Weathers will finally become one of Ghostface’s victims?

Filming began in June, and no other cast members appear to have finished filming their scenes. So it’s entirely possible that Cox has just finished her last Scream movie. After all, David Arquette’s Dewey Riley — another legacy character — was killed off in the previous installment.

The Hollywood Reporter revealed in June that Scream 6 “continues with the four survivors of the Ghostface killings as they leave Woodsboro behind and start a fresh chapter,” and it has since been confirmed that the film will take place in New York City.

Presumably, all surviving Scream (2022) characters have relocated to the Big Apple, but exactly how this has been written into the script remains to be seen. The same goes for how the filmmakers intend to tackle Neve Campbell’s departure.

Returning fan-favorite characters so far include Kirby Reed (Hayden Panettiere), who appeared in Scream 4 (2011), and Gale Weathers (Courteney Cox), who has had a major role in all five Scream movies to date.

Do you think Gale Weathers will be killed off in Scream 6? Let us know in the comments down below!