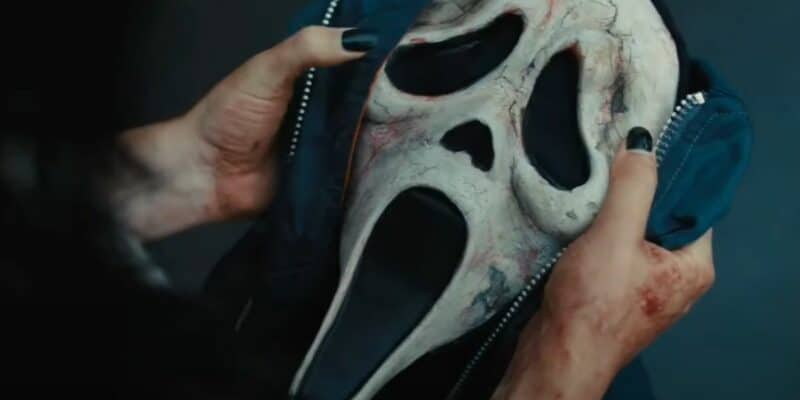 The brand-new official trailer for Scream VI (2023) left fans shocked when it premiered online last week. Not only does the film look gorier and more action-heavy than any of the five previous installments, it also promises a Ghostface killer unlike anything we’ve seen before.

“There’s never been one like me”, the new killer tells Gale Weathers (Courteney Cox), before adding, “I’m something different.” Another scene shows a Ghostface “shrine”, which includes nine Ghostface costumes on mannequins, as well as nine more mannequins each dressed in the normal clothes those previous Ghostface killers died in.

But who is the new killer? Well, fans are theorizing that it could be Stu Macher (Matthew Lillard), one of the two Ghostfaces in Scream (1996), while others believe it could be Sidney Prescott (Neve Campbell), despite the fact Campbell exited the project last year over a salary dispute.

However, while we don’t really want to know who the new Ghostface killer is — isn’t that the whole point in these whodunit slasher movies? — the new trailer definitely has us very intrigued, as does all the other promotional material Scream has unveiled in recent weeks.

Related: ‘Scream’ and ‘Friday the 13th’ Will Cross Paths In New Slasher Series

Forgetting all those Scream crosswords puzzles and Christmas-themed posters of Times Square and Ghostface-shaped New York City Subway maps, though, and speaking specifically about the new trailer, it would seem that Scream VI could be taking inspiration Star Wars: Episode IX — The Rise of Skywalker (2019).

The ninth episode in the Skywalker Saga sees Rey (Daisy Ridley) learn that she’s the granddaughter of Emperor Sheev Palpatine (Ian McDiarmid), the powerful Sith Lord thought dead for so long. During the third act, Palpatine desperately tries to seduce Rey to the dark side.

It wouldn’t be unusual for Scream to reference or pay homage to Star Wars in some way — Scream 3 (2000) features a cameo from Carrie Fisher (as a Carrie Fisher lookalike), while one of the characters in Scream (2022) mentions Star Wars: Episode VII — The Force Awakens (2015) when discussing the idea of movie “requels” — another word for legacy sequels that are more or less reboots of the original film in the series.

Either way, we already know that new Scream final girl Sam Carpenter (Melissa Barrera) is the illegitimate daughter of Ghostface killer Billy Loomis (Skeet Ulrich), from whom she inherited psychotic tendencies, which will continue to be explored in the upcoming sequel, as teased in the new trailer, with Sam now in therapy because of “the darkness” inside her.

While it might sound like a bit of a reach, what if the new Ghostface killer is the father of Billy Loomis — in other words, Sam’s grandfather? After all, Hank Loomis (CW Morgan) has lost everything — his son, and then his ex-wife Debby Loomis (Laurie Metcalf), who turned out to be one of the Ghostface killers in Scream 2 (1997), and even his lover Maureen Prescott/Rina Reynolds (Lynn McRee), Sidney’s mother.

Related: Every Ghostface Killer In the ‘Scream’ Movies Ranked

There’s a scene towards the end of the trailer in which Sam says to a presumably unmasked Ghostface off screen, “You want me.” While CW Morgan isn’t confirmed anywhere in the casting, could Hank Loomis be trying to tempt Sam into joining him and continuing the Loomis family tradition?

“This isn’t like any other Ghostface”, says one of the characters in the trailer. Well, we may have already had a vengeful parent in Debbie Loomis, but we’re yet to have a killer who tries to lure the final girl into joining the “dark side”…

Do you think Billy’s father will be Ghostface in Scream VI? Let us know in the comments down below!