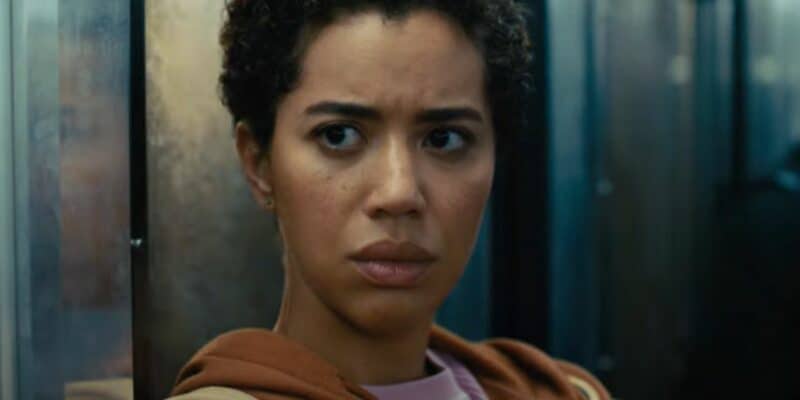 Scream VI (2023) is now just weeks away, and obviously we want to find out the identity of the Ghostface killer before seeing the film! Okay, perhaps that’s not the best approach, because Scream can only really be enjoyed if you have no idea who the killer is.

But that doesn’t mean we can’t have some fun trying to figure out who the new Ghostface is in the meantime. So, forget crosswords puzzles and Christmas-themed posters of Times Square and Ghostface-shaped New York City Subway maps — we’ve got all the clues we need right here.

One of these characters will be the new Ghostface…

Don’t you find it highly suspicious that twins Mindy Meeks (Jasmin Savoy Brown) and Chad Meeks (Mason Gooding), niece and nephew to Scream 2 (1997) Ghostface victim Randy Meeks (Jamie Kennedy), are each stabbed by the killer in Scream (2022), yet survive with a guaranteed return in this year’s Scream VI (2023)?

Come to think of it, they also have a shrine of their late uncle in their house. In the official trailer for Scream VI, we see a Ghostface shrine. Coincidence? Something else worth pointing out is the fact that Ghostface is a White male and/or female in all of the previous films, and as such, this could be the first time the Ghostface killer breaks that trend.

Motive? Either they’re avenging their uncle, or they’re just as obsessed with movies as he was — in a much less healthy way, of course.

Sam Carpenter (Melissa Barrera) might seem like an obvious choice to be Ghostface, largely because Scream (2022) explores her psychotic tendencies — a gift, of course, from her father Billy Loomis (Skeet Ulrich). Not only do we see Sam wipe her knife clean à la Ghostface after she kills Ritchie Kirsch (Jack Quaid), she also has visions of her dead father.

Scream VI only throws fuel to these flames, with Sam telling (presumably) a therapist she has a “darkness” inside her. It also wouldn’t be the first time a final girl in this franchise turns out be a killer (Scream 4‘s Jill Roberts).

Motive? Maybe she just enjoys killing, and wants to continue the Loomis family tradition. Or maybe Sam will be a separate Ghostface entirely in the new film, going toe-to-toe with the main villain.

Related: Every Ghostface Killer In the ‘Scream’ Movies Ranked

Before you roll your eyes, hear us out. The Scream films are famous for throwing audiences off the scent, whether it’s by having multiple scripts to avoid potential leaks before a film’s release, or through good old fashion misdirection in the film itself. And then there’s the marketing. So, is it possible that Neve Campbell never really quit Scream VI over a salary dispute?

Okay, this would be a very dishonest thing, and not just on the filmmakers’ part, but on Campbell’s too, especially considering she went on to talk about how women are underpaid in the industry.

Motive? Assuming the filmmakers have zero integrity (which obviously won’t be the case), we wouldn’t be surprised if Sidney Prescott (Neve Campbell) has simply snapped after all these years!

Scream fans often praise the character of Kirby Reed (Hayden Panettiere) from Scream 4 (2011) which probably explains why she’s been brought back to life for Scream VI. Her love for films does raise eyebrows, and it begs to question just how she survives that brutal attack by Charlie Walker (Rory Culkin) at the end of the fourth film.

Kirby is, more or less, killed off in Scream 4, and though there are always ways to write characters back to life if we’ve not actually seen them die, is there more than meets the eye here?

Motive? It’s no mystery that Kirby is a huge horror film buff, and, well, that’s really the only excuse a Ghostface killer needs!

Related: ‘Scream’ and ‘Friday the 13th’ Will Cross Paths In New Slasher Series

The trouble is that Hank hasn’t been seen since the original Scream (1996), but although he doesn’t look the type to don the Ghostface mask, never say never in this franchise.

Motive: In the Scream VI trailer, we see Sam telling an unseen figure (Ghostface, presumably), “You want me.” Is Sam’s grandfather trying to lure her over to the dark side in the same way Emperor Palpatine (Ian McDiarmid) is with Rey (Daisy Ridley) in Star Wars: Episode IX — The Rise of Skywalker (2019)?!

Jill Roberts (Emma Roberts) was the estranged the cousin of Sidney Prescott, and turns out to be one of the two Ghostface killers in Scream 4, alongside Charlie Walker. However, while she’s shot in the chest, late director Wes Craven’s DVD commentary reveals that she may not actually be dead — in fact, you can see her moving ever so slightly in the final scene.

Jill is easily one of the more entertaining Ghostface killers, but would bringing her back make any sense? Well, Kirby “dies” in the very same film, so the short answer is yes, why not!

Motive: Well, she was a Ghostface killer once before, and we doubt her ambition to become infamous overnight has waned much over the years behind bars.

Related: ‘Scream 6’ May Owe Its Shocking Ghostface Reveal to ‘The Rise of Skywalker’

There are many off-screen deaths in the Scream franchise — they’d feel a little monotonous if we saw all of them happen before our eyes, and sometimes, such kills can add to the suspense, while allowing for some genuine shock-horror when the unlucky character’s body is eventually discovered. And down the line, they can also allow for certain characters to return.

Enter Randy Meeks. What a tragedy it is to see him get pulled into that news van in Scream 2, and watch through the wing mirror as Ghostface stabs him repeatedly. And though Debbie later brags about the kill, where there’s a sequel, there’s a way.

Motive: It’s the millennium — motives are incidental. Okay, so it’s 2023, but you appreciate the sentiment, right?

Related: “There’s Never Been One Like Me,” ‘Scream’ Breaks All Its Own Rules In Shocking New Trailer

Stu Macher (Matthew Lillard) is currently the favorite where returning characters are concerned, as the theory that he doesn’t actually die in the original Scream is currently doing the rounds. After all, while a television does fall on his head and electrocute him, he’s the only Ghostface who we don’t see explicitly die on screen.

And what’s up with that old-looking Ghostface mask in the new trailer..? With all of that said, Scream writer Kevin Williamson recently shut down rumors that the character has been brought back to life. Damage control, perhaps?

Motive: Stu is one of the original Ghostface killers, alongside Billy Loomis. Remember his iconic line, “These days, ya just gotta have a sequel!” Well, why wouldn’t a legacy Ghostface killer like Stu want to come back for the sixth film? Talk about admiring your own work.

Now for some honorable mentions…

Who else could turn out to be Ghostface in Scream VI? One of the first people that comes to mind is a prominent yet unseen character in the franchise — Sidney Prescott’s mother Maureen. The character who pretty much started it all, leading her illegitimate son and original Ghostface killer Roman Bridger (Scott Foley) to start something that could never be undone.

With that said, bringing any dead character back to life (Kirby not included) would be a cop-out. But there is another way to narrow down our list of suspects. If Scream VI follows its predecessors where Ghostface is concerned, it will be one of the new cast members. In every Scream sequel so far, the killers have all turned out to be newly-added actors, and not returning ones.

If, however, Scream VI is going to break the cycle of new cast members being the killers, then Ghostface must be a pre-existing character, whether it’s one of the past killers like Stu, a killed-off character like Randy, or a survivor like Sam or one of the other Scream (2022) characters like Tara Carpenter (Jenna Ortega).

“This isn’t like any other Ghostface,” one of the characters says in the trailer. Ghostface himself even tells Gale Weathers (Courteney Cox), “There’s never been one like me”. Shotguns, scarred masks, and secret shrines? We’re inclined to believe them.

But what do they really mean? Well, the line is in response to Gale telling Ghostface that “it never ends well” for the killers. Trailers are known to mislead, of course, which means that this conversation may not flow in the way the trailer suggests, but something fishy is going on.

So, to conclude, Scream VI‘s Ghostface must be one or more of all the characters we’ve talked about, whether it’s those on the list, or any one of the honorable mentions. If it turns out to be someone we’ve never met before, well, that’s just lazy writing.

We also wouldn’t be surprised if there’s a flashback to one of the previous movies, whether it’s used to explain how Kirby survives, or perhaps even Stu (who we’d bet our money on).

Who do you think the Ghostface killer will be in Scream VI? Let us know in the comments down below!