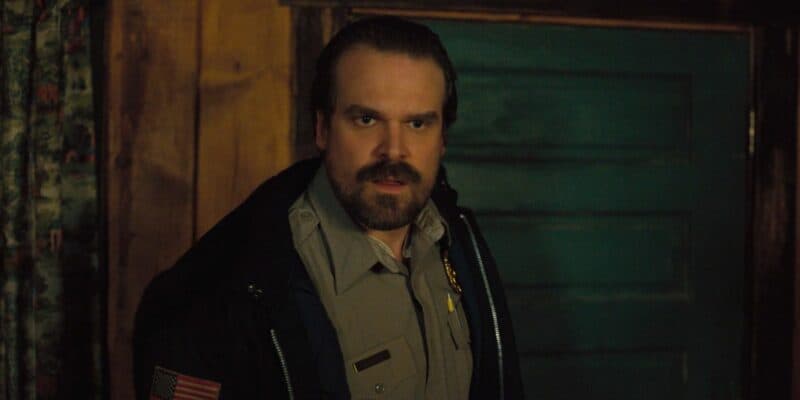 While there’s no release date in sight for the fifth season of Stranger Things (2016), the show will still be coming to an end sooner than we’d like. The fourth season made waves on Netflix last year, climbing to the top of the most-viewed list and breaking records for the streaming service.

Though hearts were broken by the death of newcomer Eddie Munson (Joseph Quinn), soon, we’ll have to say goodbye to the entire Stranger Things ensemble, including the likes of Eleven (Millie Bobby Brown), Dustin Henderson (Gaten Matarazzo), and Max Mayfeld (Sadie Sink).

Related: ‘Stranger Things’ Star Confirms What We All Suspected About Season 5

However, a number of cast members are already securing futures beyond Stranger Things, such as Finn Wolfhard (Mike Wheeler), who will be returning in this year’s Ghostbusters: Afterlife (2021) sequel, and Joseph Quinn, who was recently cast in the A Quiet Place spin-off.

And now, it seems that David Harbour (Jim Hopper) is also on board for another franchise, as he too, like all his fellow cast members, is leaving the show after the fifth and final season.

Last year, Harbour starred in the R-rated Christmas comedy-thriller Violent Night (2022), which finds Santa Claus (David Harbour) trapped in a hostage situation, where he must rely on wits — and a very sharp-tipped candy cane — to save an innocent family, and with them, the spirit of Christmas.

The film grossed over $75 million at the box office on a budget of $20 million, and now, director Tommy Wirkola has confirmed that Violent Night 2 (TBA) is happening. In an interview with The Wrap, when asked about a sequel, Wirkola said, “Yes. We’re talking about it and we’re just making deals and getting everything in order.”

The director also went on to share some of his thoughts on where Violent Night 2 could go, saying:

“There’s stuff we left on the floor like the North Pole, Mrs. Claus, the elves. But story-wise I think we have a really, really cool idea that expands on the world and scope, but still keeping that tone that we love from the first one.”

While Wirkola doesn’t mention Harbour directly, it’s likely the actor will be back on board. But he probably won’t be donning the big white beard again until after leaving Stranger Things, with Season 5 expected some time in 2024 (there’s also no release date for the Violent Night sequel as yet either, but as it’s a Christmas movie, we probably won’t see it until November or December, 2024 at the earliest).

Either way, Violent Night isn’t the only franchise Harbour will be returning to, as he will also be reprising his role as Alexei Shostakov/Red Guardian in the Marvel Cinematic Universe’s Thunderbolts (2024).

Did you enjoy Violent Night? Let us know in the comments down below!