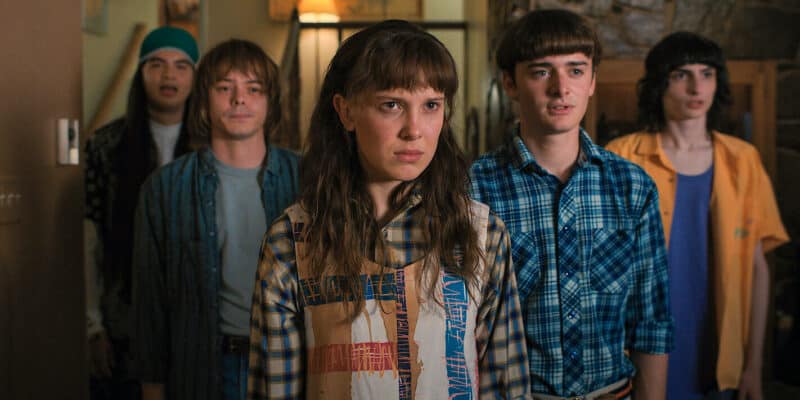 Stranger Things 4 is finally over. The fourth season in the critically-acclaimed ’80s-set sci-fi horror drama series is the longest yet, with each of the first seven episodes clocking in at around 1 hour 15 minutes, while the explosive finale doubles up at an epic 2 hours 30 minutes.

The season is split into two “volumes”, and the final two chapters certainly don’t pull their punches, as it’s all out war for Hawkins as Upside Down’s “dark wizard” Vecna/One/Henry Creel (Jamie Campbell-Bower) threatens to destroy the barrier that separates both worlds.

Like the previous seven episodes, the last two deal with a number of different plots as our characters aren’t all congregated in Hawkins like we’re used to seeing. Ultimately, they intersect, but even on their own, each adventure is compelling and nail-biting in its own right.

Meanwhile, Eleven tries to escape the Hawkins Lab all over again as Papa/Martin Brenner (Matthew Modine) forces her to quite literally face her demons in an attempt to restore her lost psychokinetic powers, so that she may face Vecna and save her friends.

To say that Stranger Things 4 ends on a major cliffhanger would be the understatement of the year. Joyce, Murray, and Jim finally escape the Russian prison after destroying an army of Demogorgons, while Eleven “piggybacks” into Max’s mind to protect her from Vecna.

Newcomer Eddie Munson (Joseph Quinn) goes out in a blaze of glory as he shreds Metallica’s “Master of Puppets” in the Upside Down to distract a horde of bat-like creatures. A distraught Dustin says his goodbyes, before later telling Eddie’s uncle that his nephew died a hero.

After an epic confrontation with the dark wizard, Eleven fails to save Max, and we’re forced to watch as her limbs break while her body levitates, before she dies in a hysterical Lucas’ arms. In the real world, Steve, Nancy, and Robin seemingly destroy Vecna’s body using fire.

But with Max dead, the “fourth gate” between Hawkins and the Upside Down opens — just as the gang predicted — and it comes in the form of a hellish earthquake that literally splits the town down the middle, causing chaos, destruction and panic.

In the epilogue, we learn that Max has survived, but is lying comatose in the hospital. Eleven tries to find her telepathically, but fails to do so. Meanwhile, a mass evacuation is underway as Hawkins residents leave the town behind.

All of our heroes finally reunite, and just as we think things couldn’t get any worse for Hawkins, Will shivers as he feels something land on the back of his neck. Upon turning around, he and the others watch as the same white ash from the Upside Down begins to fall upon Hawkins.

A number of our heroes gather at a hilltop as supernatural storm clouds form above their hometown. Undoubtedly, you’re probably wondering: Will there be a Stranger Things 5? Well, you’ll be pleased to know that a fifth season has been confirmed and is already underway.

Besides, do you really think the Duffer brothers would leave things as they are for the residents of Hawkins? Despite all those epic battles in Stranger Things 4, it’s obvious that the fight of their lives is yet to come, and it looks like Season 5 is shaping up to be even bigger than Season 4.

So, when will Stranger Things 5 come out? Well, unfortunately, we’re all going to have to learn to exercise a lot of patience, because the fifth season is more than likely some time away, as filming hasn’t even started yet. However, 2024 is the current rumored year of release.

Stranger Things 5 is also the final season, so it would be wise to expect several deaths. Recently, Millie Bobby Brown criticized the show for its abundance of characters, telling the Duffer brothers “You need to start killing people off” and that the show needs to be like “Game Of Thrones“.

During a recent appearance on the Happy Sad Confused podcast, the Duffer brothers, Matt and Ross, discussed the fifth and final season, specifically its length.

“We don’t expect it to be as long,” they said. “And the only reason we don’t expect to be as long is because typically – or this season, if you look at it, it’s almost a two-hour ramp up before our kids really get drawn into a supernatural mystery. You get to know them, you get to see them in their lives, they’re struggling with adapting to high school and so forth. Steve’s trying to find a date, all of that. None of that obviously is going to be occurring in the first two episodes of [season five]. For the first time ever, we don’t wrap things up at the end of four.”

Speaking about the duration of the episodes in Season 5, they said:

The creators also compared the ending of Stranger Things 5 to Peter Jackson’s epic The Lord of the Rings: The Return of the King (2003), hinting that it would be a particularly long finale:

“It’s going to be Return Of The King-ish,” they said, “with like, eight endings.”

But while Stranger Things 5 is the final season, it doesn’t mean it’s the end. A Stranger Things spin-off has been confirmed, and during the podcast, the Duffer brothers also talked quite a bit about the project:

“Hopefully we find that right person to pass the baton to while we go on to do new stuff,” they said.

Addressing the rumors that the show will feature Eleven, Steve, and Dustin, they added:

“It’s not following — I’ve read these rumors that there’s gonna be an Eleven spinoff, that there’s going to be a Steve and Dustin spinoff, or that it’s another number. That’s not interesting to me because we’ve done all that. We’ve spent I don’t know how many hours exploring all of that. So it’s very different. The most important connective tissue I would say is the storytelling sensibility of it. There is story that connects to the Stranger Things world, but it really is more about how we’re telling that story.”

They described the spin-off as “1000% different” from Stranger Things.

Are you looking forward to Stranger Things 5? How do you think it will all end? Let us know in the comments down below!

Comments Off on Showrunners Discuss ‘Stranger Things’ Spin-Off, Compare Season 5 to ‘The Lord of the Rings’