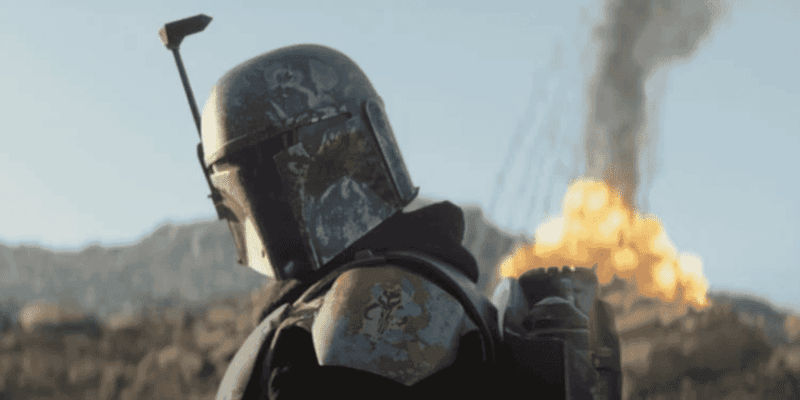 The Mandalorian has been a revival of hope for Star Wars fans. After so many were unhappy with Star Wars: Episode VII – The Last Jedi (2017), and Star Wars: Episode IX – Rise of Skywalker (2019), fans were beginning to lose hope, but, there was a new show, just gaining steam. A mysterious bounty hunter, an almost painfully cute Baby Yoda, and a previously unexplored era, after the fall of The Empire, and the rise of the New Republic.

The new series, following Din Djarin (Pedro Pascal) and Grogu (Himself) has been a landmark success in the era of Disney Star Wars content, with very few complaints from a fanbase that is often divided. It was an even great surprise then, when in the second season, after seeing his infamous armor on Cobb Vanth (Timothy Olyphant), Boba Fett (Morrison) himself showed up, and reclaimed his armor, and position amongst in the universe. His return was something to behold: taking out an entire squad of Stormtroopers almost singlehandedly, bashing in helmets with a Gaffi stick, then, reclaiming his armor, and showing audiences it’s full deadly arsenal.

It stands to reason after a comeback like that fans would be elated to watch his solo series, The Book of Boba Fett, especially after that teaser scene in which Boba (Morrison) along with Fennec Shand (Ming-Na Wen) violently claim the throne and dominion of Jabba the Hutt from Bib Fortuna (Matthew Wood). The board was set, and things looked very promising for the return of one of the most intimidating, albeit silent characters from the original trilogy.

While The Book of Boba Fett gave audiences some amazing moments, such as the bounty hunter riding a rancor through Mos Espa during the finale, it also fell short in many areas. Fett (Morrison) spent much of the season in a Bacta Tank, he seemed much more merciful than his Star Wars: Episode V – The Empire Strikes Back (1980) counterpart, and then there was the hover moped gang. Something just seemed a little off for a series about the most infamous bounty hunter in the galaxy. It seems audiences aren’t the only one who thought so either!

In a recent interview, as reported by the Direct, actor Temuera Morrison spoke about the reintroduction of Boba Fett to the franchise, and said they’ve got to bring back “the old Boba Fett” somewhere. The actor, who has now played both Jango Fett and Boba Fett, as well as the clones, acknowledged that there were some important discoveries made during The Book of Boba Fett:

“We reintroduced him. We found out some stuff. But I think it’s time to get him back to his badass ways. No two ways around that. So, I think we sort of have that scope to go back there, but that’s out of my control. I’ll just see what happens.”

With the revelation that Jango (Morrison) was indeed a Mandalorian Foundling, like Din Djarin (Pascal), Boba (Morrison) may have some stake the events that will be happening in the thirds season of The Mandalorian, which will be taking audiences back to Mandalore. Trailers have yet to show Fett (Morrison), but it’s still possible he could show up. Could this be a return to the “Old Boba Fett” to the Star Wars Universe? Until the new season of The Mandalorian, fans will just have to wait, and wonder about the future of the bounty hunter.

What do you hope to see for the future of Boba Fett? Let us know in the comments below!