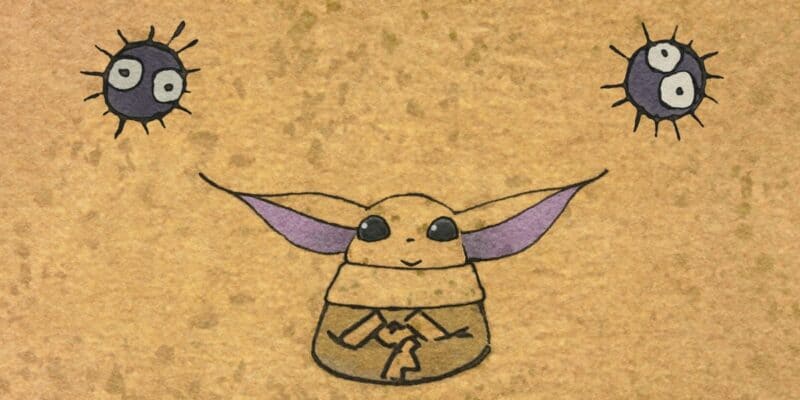 A surprise addition to Disney+, and an incredible partnership between anime legends Studio Ghibli and Lucasfilm, Zen — Grogu and Dust Bunnies (2022) was added to the streaming platform earlier this week.

It’s an animated short, with emphasis on short — this is but a morsel of what could be possible in a wider partnership between the two entertainment giants.

Directed by Katsuya Kondo, it sees Grogu (or “Baby Yoda”, as he will most likely forever be known) in a state of deep meditation. His relaxation is interrupted by a flotilla of Dust Bunnies, little soot creatures previously seen in classic Ghibli movies My Neighbour Totoro (1988) and Spirited Away (2001).

Awoken from his trance, Grogu stumbles away from the little creatures, and eventually trips up and falls. As he spins to look at them, they form a swaying pillar and hand him a vibrant pink flower. Grogu turns to face the audience and in the air, draws an ensō symbol, which is then realized on screen.

The symbol, from Zen Buddhism (hence the title), represents a journey, harmony within living things, and enlightenment. In this context, it works wonderfully for Grogu, who as we know from The Mandalorian and The Book Of Boba Fett, is very much on his own journey of discovery towards being a Jedi, a Mandalorian himself, or something in between.

The combination of the lush, hand-drawn animation and a hypnotically charming score from Swedish composer (and The Mandalorian mainstay) Ludwig Görannson make this an enchanting couple of minutes.

A wonderful, evocative little treat to celebrate the third anniversary of The Mandalorian, and much like the ensō, representative of what can happen when two iconic entertainment institutions collaborate — while also being adorable.