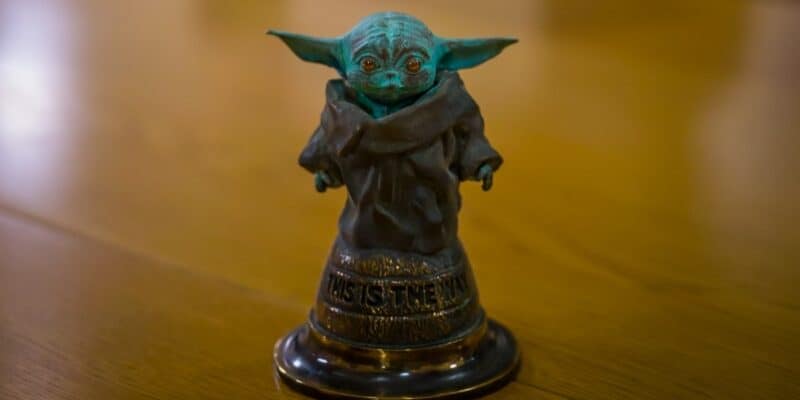 It was recently announced that Studio Ghibli would be producing a Zen-themed short film starring everyone’s favorite green-eared child from The Mandalorian. Billed as Grogu and Dust Bunnies, the collaboration between Hayao Miyazaki’s iconic animation powerhouse and Lucasfilm premieres just days after the original teaser on social media.

The artwork from Disney+ appeared on socials shortly after a Twitter post featuring a mashup of both studio logos and a statue of Grogu from Miyazaki’s profile. Judging from the crayon-esque artwork of Grogu and the “Dust Bunnies,” fans can expect a simple, adorable, and effective from the minds, creatives, and artists behind The Mandalorian and My Neighbor Totoro. Regardless of the special’s limited information, anything from Studio Ghibli will undoubtedly be a heartfelt and enchanting production. Even if it’s set in a galaxy, far, far away.

For those who haven’t been keeping up with the Star Wars universe, Grogu (better known in some circles of fans as “Baby Yoda”) is one of the central figures in The Mandalorian. Small, adorable, and insanely gifted with the Force for a toddler, Grogu is easily one of the most popular characters in the galaxy in recent years. Of course, his little wide-eyed co-stars are sure to be just as enchanting.

While they are called “Dust Bunnies” in the title, fans of foreign films and anime might better recognize them as “Soot Sprites,” “Soot Gremlins,” or “Susuwatari” in Japanese, and they are exactly what their name implies. They are tiny beings of dust and dirt that live in old houses or structures. They can most prominently be seen in the films My Neighbor Totoro and the Oscar-winning Spirited Away. However, they are also prominently featured across multiple examples of Studio Ghibli’s media. Who knew a black ball with two huge eyes could have such a memorable effect.

As of writing, it is currently unknown just what sort of antics these two characters from two incredibly different studios. However, if the reputations of either characters are anything to go by, Disney+ subscribers are in for a massive tidal wave of cuteness overload come this weekend. The short film drops November 12, 2022, and fans of both Ghibli and Star Wars will certainly be in for a treat.

Are you excited for the Grogu/Ghibli crossover? Tell us in the comments below!