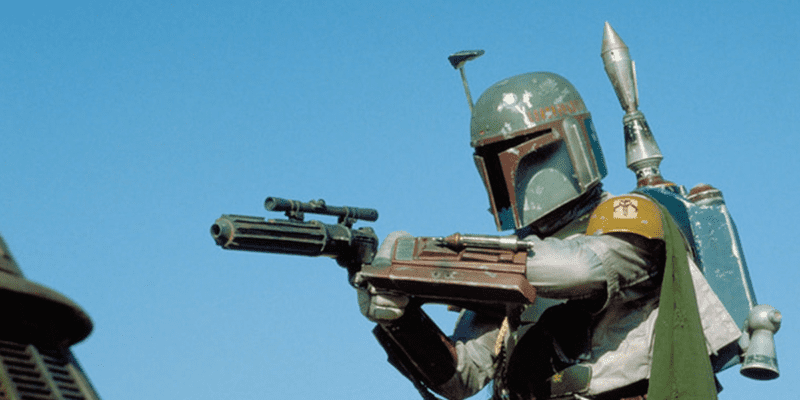 Boba Fett is synonymous when it comes to bounty hunters in the Star Wars universe, but fans might not know about his first canonical appearance and how it wasn’t on the big screen. 44 years ago today, Luke, Chewbacca, C-3PO, and R2-D2 encountered a mysterious figure during the Star Wars Christmas special.

While Boba Fett was already planned to appear in The Empire Strikes Back, the bounty hunter was first introduced to fans during the animated segment, “The Story of the Faithful Wookie.” While the missing special is still absent from Disney+’s extraneous library of Star Wars material, the short film that gave audiences a brief taste of the infamous bounty hunter can still be viewed in its entirety. Of course, Fett has grown far beyond the garden-variety villain since then. From ruthless bounty hunter to Daimyo of Tatooine, Fett has become a much more developed character since his first on-screen debut.

Of all the Star Wars characters to pull themselves from the Sarlacc Pit of sci-fi history, Boba Fett has gone from fan-favorite side-character to full-fledged power player in the galaxy far, far away. 44 years after his original debut, Fett has had major appearances in the original feature films, the animated media, and even an appearance in both The Mandalorian and his own spinoff series.

Viewers have seen him grow from a clone of Jango Fett to one of the most powerful figures in the system. Even George Lucas and all his industrial light and magic couldn’t have predicted how popular the character has become.

Related: New ‘Star Wars’ Series Going All In On Exploring the Evil Side of the Rebellion

Compared to the dinosaur-riding animated debut to the samurai-inspired crime lord of Tatooine, Boba Fett has had possibly the most drastic character shift in the entire series. It’s honestly impressive and inspiring how a fan-favorite character can receive enough hype to earn his own fully-fleshed-out story arc. With any luck, perhaps fans can hope for the same treatment for characters like Chopper, Poe Dameron, or Kylo Ren.

Have you watched Boba Fett since the beginning? Tell us in the comments below!