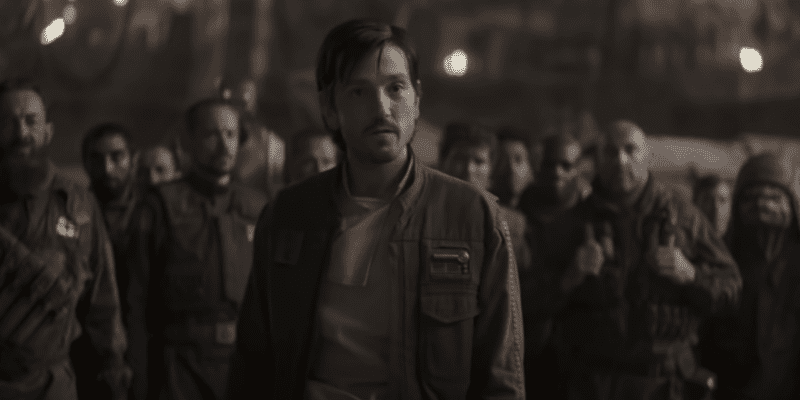 Andor is gearing up for its second season which might lead viewers to no longer root for the Rebels in the same way.

Unlike the Original Trilogy, Tony Gilroy doesn’t care to explain a story where both sides are clearly good and evil. Luke, Leia, and the Rebellion were heroic in the movies, but Rogue One: A Star Wars Story (2016) revealed that the Rebellion isn’t full of heroes.

When Cassian explains to Jyn Erso that the crew who want to fight on Scarif are all former thieves, murderers, and assassins working for the Rebellion, it becomes very clear that the line between good and evil is blurred. Sometimes, to win a war, people must compromise their morals and do terrible things like their enemy to get what they want.

With Andor Season 2, Tony Gilroy is starting to get ready to leave for the UK to begin filming, but he couldn’t help himself, so he shared an update with fans in an interview on what will be different in the second season since making the series into five seasons would’ve been “impossible”:

“It just would have been physically impossible. We’re about to start shooting the second half in a month. So we’ve been prepping for the whole last year. There’s two directors in Pinewood [Studios, in the U.K.] that are prepping right now, and I’m getting ready to go over there and trying to get all our scripts together.”

The Rebellion will change, and the Andor showrunner explains how the season will feel very different than the first season, with Cassian no longer trying to be a revolutionary, but a leader:

“And I’m hoping what we’re gonna do in the second half will make the meal feel really satisfying. Because the first year is really about him becoming, and the last line of this tranche of 12 episodes will sum up where we’ve been trying to get to. And we come back a year later. It’ll be very different. The next four years [of story] are not about becoming a revolutionary. They’re about learning to be a leader and how difficult it is to put the alliance together and what happens to people who are the original gangsters versus the establishment and a lot of different other issues.”

Gilroy continues by explaining how fans should expect to see the Rebellion change as people begin to betray each other, go crazy or become tired from fighting, which will change the dynamic:

“I’m carrying forward something like 30 characters. So what becomes interesting is now we can play the negative space. When you jump a year, what happened in between? You know the people, you know what their trajectory was. It’s energizing. We will be starting new characters, obviously, in the next 700 pages. There will be all kinds of new things, and will be just as granular as we ever were. And really, the second half is about what does time do to these people? People grow up, and people get tired, and people betray each other, and people change their minds, and people get weak, and people get crazy.”

Fans have been enjoying the first season of Andor for how it takes time to develop characters and never pushes cameos or action into the forefront unless it serves the story. Some are afraid that Andor Season 2 won’t live up to the hype that Season 1 has created, as the series will completely change its storytelling structure in the second season.

These concerns are valid, but this will allow fans to see many more characters and quickly connect more to the Star Wars galaxy. There are a lot of important characters in the Rebellion, and there’s a good chance that fans will see quite a few essential characters appear again.

Some fans might be upset that Lucasfilm will explore the complex side of the Rebellion and not make everyone look like a hero, but that’s not the point of Gilroy’s storytelling. Every character isn’t black and white, and that’s the point, which means that the Rebellion does several terrible things in their war to liberate the galaxy from the Empire. Some of their action probably prevented people from joining their cause, but it’s the price that had to be paid to take the Empire down.

Stellan Skarsgard’s Luthen Rael knows this lesson all too well as he says he is forced to use the “tools of my enemy” in his speech with ISB supervisor Lonni. Luthen understands that war can’t be won by fighting ideally without any committing war crimes against the Empire as they have more resources, more men they are willing to sacrifice, and better weaponry.

Are you excited or nervous about Andor Season 2? Let us know what you think!