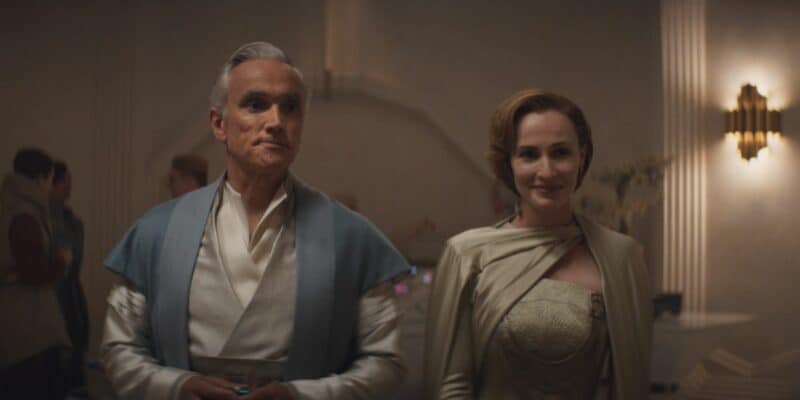 Who in the galaxy is Davo Sculdun?

Instead, they were mentioned in the middle of the episode, in a conversation between burgeoning Rebellion leader Mon Mothma (Genevieve O’Reilly) and her financier ally Tay Kolma (Ben Miles); he is described as an undesirable but essential way for Mon to bury some missing funds. With Imperial auditors combing through her accounts, Tay says she needs to hide a conspicuously unaccounted-for 400,000 credits.

Davo Sculdun is his solution. But who is this mysterious figure?

The mention of his name in the episode is met with disdain by Mon Mothma. Davo is ostensibly a Chandrilan banker, much like Tay, but clearly, there is some history or a reputation that precedes him. She’s appalled by the idea of having to work alongside him with her money.

“He is not a banker. He is a thug,” Mon Mothma says. “The wealthiest thug of them all,” Kolma replies.

Mothma questions whether Sculdun will be suspicious of her need for the loan, but Kolma dismisses her concern; she will be one client among many in his contact book, just another politician out to get what’s theirs.

As the conversation plays out, Mon’s anger at having to resort to Davo is tangible. It turns to dismay when Tay reveals not only has he already reached out to him, he wants to meet her at her home.

In an episode that saw the malevolent Dr. Gorst (Joshua James) weaponize the screams of a dying alien race, the Dizon Fray, as an interrogation technique, it does make you ponder just how much of a villain Davo could turn out to be.

He is representative of Andor’s illuminating look at what it takes to mount a rebellion against the Galactic Empire. Much like Rogue One: A Star Wars Story (2016) did before it, Andor is shading the battle between light and dark with plenty of gray.

Mon is clearly principled — she would never have made it to this stage if she didn’t hold the cause close to her heart, and her public persona is one opposed to the Imperial overreach. But as the series goes on, we see the strain taking the cause from an idea to an actioned movement is taking on her. It is a battle of attrition with her morals and limits.

She has had to accept the impression she is potentially having an extramarital affair due to the subterfuge involved in meeting and talking with her fellow rebels, like Tay or Luthen Rael (Stellan Skarsgård).

I cannot believe Mon Mothma’s cover for the Rebellion is “chronic homewrecker.”

Not only do Perrin and Leida imply that she’s having an affair with Tay in #Andor, there’s also That Dinner Scene in Leia: Princess of Alderaan.

I cannot believe Mon Mothma's cover for the Rebellion is "chronic homewrecker."

Not only do Perrin and Leida imply that she's having an affair with Tay in #Andor, there's also That Dinner Scene in Leia: Princess of Alderaan.

She has already begun compromising her public persona for the cause. Perhaps lowering herself to receive help from Davo is another such compromise for Senator Mon Mothma: another necessary sacrifice to secure the future of the Rebel Alliance.

It comes in an episode that saw Andy Serkis’ Kino Loy unblinkered, facing a prospective future prison break at the hands of the Imperial regime, and Ferrix shop owner Salman Paak (Abhin Galeya) seemingly being sentenced to death for his part in rebel activities. Bix Calleen (Adria Arjona) is now in the ISB’s hands, having been tortured with Dr. Gorst’s monstrous invention. This is a high-stakes game of galactic chess.

We do know Sculdun will have a wife, with Scottish actress Rosalind Halstead set to appear as her.

Where Has Davo Sculdun Appeared?

Davo Sculdun is yet to actually appear in the Star Wars universe, beyond this initial namedrop in episode 9 of Andor. This is a surprise, especially for your average Star Wars fan who can usually rely upon the smallest mention of having a cross-reference to another part of the galaxy or previous appearance. It is almost certain that Davo will make his live-action debut in the next episode, coming to meet Mon Mothma at her residence to discuss her financial espionage.

When Is Andor Set?

Andor is set five years before the Battle of Yavin (5 BBY), and roughly five years before the events of Rogue One. It runs alongside the animated show Rebels (2014) in the timeline, following a similar tale of the rebellion’s early inception and beginnings as grassroots, guerilla activism across the galaxy.

By the end of Andor‘s two seasons, showrunner Tony Gilroy has confirmed it will segue seamlessly into the start of Rogue One, itself providing the cataclysmic end for Rebel spy Cassian Andor with his heroic sacrifice — alongside the rest of the team, including loyal reprogrammed Imperial droid K-2SO (his model made an appearance earlier in the series) and Felicity Jones’s Jyn Erso.

Other direct links to Rogue One in Andor so far include the appearance of Forest Whitaker’s Saw Gerrera, leader of the Partisans, an extremist, isolationist sect of the Rebellion. And imprisoned alongside Cassian is future comrade Ruescott Melshi (Duncan Pow), who will eventually fight alongside him in the battle to retrieve the Death Star plans on Scarif.

It is a volatile period in the galactic timeline, with Emperor Palpatine ruling from the post-Clone Wars puppet Senate and characters from Boba Fett to, yes, Davo Sculdun on their own journeys through space.

Who Is Davo Sculdun Affiliated With?

From what we know so far from the episode, Davo is a Chandrilan banker familiar to those from the planet, such as Mon Mothma, Tay Kolma, and presumably Mothma’s family such as husband Perrin Fertha (Alastair Mackenzie) and perhaps even daughter Leida (Bronte Carmichael).

Mon Mothma’s suspicion and reluctance to deal with him suggest Sculdun has underworld connections, or at the very least a reputation for unsavory financial dealings.

But Tay Kolma’s suggestion means she and the future Alliance To Restore The Republic will also have a link to this mysterious financier. As mentioned earlier, Andor is showing that the rebels, while obviously on the side of right, are not built on a foundation of entirely pure or morally solid grounds. It is formed not with heroes, but with people who have the will to get the job done and the means to do so.

Guerilla warfare on the scale of what the rebels are attempting to achieve is inevitably messy and desperate. Having to make decisions and work alongside less-than-reputable characters is part of the burden of leadership Mothma carries; on a ground level, we’ve seen the human cost with the Aldhani Heist and the losses suffered there earlier in the series.

There is compromise and peril at every level of the movement, and Davo Sculdun represents the gray territory our protagonists must enter to continue the fight.

What do you think about Davo Sculdun’s upcoming appearance? Will he help or hinder the rebel cause? Let us know in the comments below.

Andor (2022) is one of the Star Wars series and TV shows currently streaming on Disney+. Led by showrunner Tony Gilroy, it stars Diego Luna as Cassian Andor, Genevieve O’Reilly as Mon Mothma, Stellan Skarsgård as Luthen Rael, Fiona Shaw as Maarva Andor, Denise Gough as Dedra Meero, Adria Arjona as Bix Calleen, Faye Marsay as Vel Sartha and Kyle Soller as Syril Karn. Set before the events of movie Rogue One, in the years prior to Princess Leia’s fateful capture by Darth Vader, it follows the formation of the Rebel Alliance in the ever-expanding Star Wars universe.

Comments Off on Who Is Davo Sculdun In ‘Star Wars: Andor’?