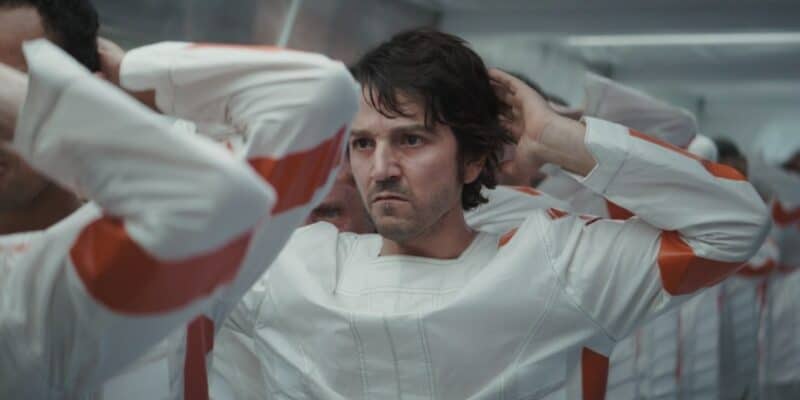 The more they strive for the light, the more the darkness closes in on our heroes. This week’s episode of Star Wars: Andor demonstrates more than ever the Empire’s brutal brand of rule: From massacring an entire block of prisoners to weaponizing the screams of a dying race as an interrogation tool, more than ever you can sympathize with the Rebellion’s struggle for freedom. And yes, Cassian Andor (Diego Luna) is still in jail.

We open where the last episode left us: ISB Supervisor Dedra Meero (Denise Gough) interrogating Bix Caleen (Adria Arjona) in the hotel base on Ferrix. As we saw last week, Dedra relishes the chance to put all of her intimidation and manipulation tactics to the test.

Having already broken shop owner Paak (Abhin Galeya), she first illuminates Bix on everything she has learned — that Bix has met her buyer six times, that she has been the primary point of communication on the planet for the network — and then drives it home with the threat of a chilling new torture technique.

Related: ‘Andor’ Episode 8 Ending Explained: Andor’s Future Could Lie In a Character From ‘Star Wars’ Past

Dr. Gorst (Joshua James) is on hand with a weapon made from and made for barbarism; an audio recording of the screams of dying children, members of an alien race, the Dizon Fray, previously wiped out by the Empire. As the headphones are placed on Bix’s ears, she begins to scream. He relishes the moment to see it in action.

On Narkina 5, Cassian is leading their team, optimizing them for victory in the room against their fellow prisoners. But Ulaf (Christopher Fairbank) is struggling. The elderly team member is closing in on the final days of his sentence. But his hard time has taken its toll. The team is attempting to cover for him.

In a short gap, Cassian runs to an alcove and breaks open a panel. He begins to furiously saw at a mechanical element. He has to stop to witness a new man being brought in. As they are, he notes vulnerabilities in the system: The elevator isn’t wired to the electrical enforcement.

On Ferrix, Dedra has finished with Bix. An officer gleefully asks if he can hang Paak in the square to make an example of him; Dedra doesn’t care either way. She’s got what she needed.

In the Senate, Mon Mothma (Genevieve O’Reilly) pleads her case against Imperial overreach. At best, she’s met with disinterest. At worst, she is catcalled with cries of support for the Emperor’s regime. Back in her speeder, she’s told her cousin has arrived, news she meets with visible anxiety.

Back on Narkina 5, the system of hand signals between bridges has delivered the news that something has happened on Level 2. As gossip spreads among the line, Kino Loy (Andy Serkis) demands quiet. The Imperial voice over the speakers warns the prisoners that floors will be activated at random in the event of trouble.

In the cells, Cassian questions Kino’s lack of interest in escaping. Kino spits a demand for silence, choosing to believe in the idea that they will leave the prison when their time is served. Cassian insists no one is listening: The Empire has so little disregard for their detainees beyond their use on the work line. He wants to know how many guards are on each level, still trying to plan an escape. As Kino ignores him, he roars, “Is anybody listening!”

At the ISB, Dedra delivers the disappointing news that they haven’t yet found their target known as Axis, but shares her success gleaning more info about Andor. Enter Attendant Heert (Jacob James Beswick), her assistant. He shares a potential link adding Andor to the Aldhani heist. Cassian’s clean-shaven appearance has him identified by multiple witnesses.

Back in the prison, the rumors have persisted: An entire bridge was wiped out, and 100 men dead. Melshi (Duncan Pow) says, “They set them all free”.

At Mon Mothma’s home, it’s revealed that Vel (Faye Marsay) is her cousin. Vel mentions Tay Koma (Ben Miles) being back on the scene as an old flame from Mon’s youth. But Mon is preoccupied with being visibly shaken by her vulnerable situation as the Empire closes in with their investigation. She questions what they’ve done.

“Chosen a side, fighting against the dark,” Vel says. “Making something of our lives.” As Vel departs for Chandrila, Mon is left alone.

Syril Karn (Kyle Soller) is disassociating, sitting in his mother’s home as she highlights his failings. He snaps back to her that he has been promoted. She can’t wait to tell his uncle.

Outside the ISB, Syril waits for Dedra, who looks shocked at his boldness. He clearly intended to make his case to continue to work with her against the Rebellion, certain he is essential to her success and in admiration of her work so far. Instead, he comes off as desperate, obsessed, and dangerous. His manic stare is met with disgust. Dedra threatens his job and stalks off.

Mon is speaking to Tay, who says they need to find a reason for a missing 400,000 credits from her accounts. He thinks he has a solution in Davo Sculdun, a Chandrilan banker. Mon looks appalled at the notion of having to work with such a “thug”. Tay says Davo wants to meet at her home.

At the ISB, they’ve identified an opportunity. A captured rebel pilot has spilled about the upcoming raid on the Imperial base on Spellhaus. They are going to stage an accidental death for the pilot, let him drift into a shipping lane, and watch how their operation swings into gear.

Back on Narkina, Ulaf has taken a turn for the worse. He collapses in the corridor and Kino calls for a Med Tech. The tech, Uli Rhasiv (Adrian Rawlins) says there’s nothing he can do. Ulaf has suffered a massive stroke, brought on by the intensive relentless work. He euthanizes him, saying he is lucky to pass so peacefully.

As Ulaf chokes his last breath, Kino and Cassian receive a warning from the doctor: Keep in line. They discover the Empire made a mistake on Level 2, sending a man who had just been ‘released’ back into the general population. No one gets out. But the word did. The Imperials wiped out the entire floor in an effort to make sure the unrest didn’t spread.

Cassian asks Kino again how many guards there are on each level.

Moment of the Week:

For me, while the massacre of the prisoners and the opening interrogation scene are obviously affecting, it was the casual nature of discussing hanging Paak’s body as an example in the square which drove home how closely Andor is to referencing the casual horror of inhuman acts. The dismissive nature of Dedra’s reply only served to drive it further home; this is a war crime by paperwork, a hanging as casually approved as a memo about keeping desks tidy.

What did you think of Andor Episode 8? Tell us in the comments below.
Andor (2022) is currently streaming on Disney+. Led by showrunner Tony Gilroy, it stars Diego Luna as Cassian Andor, Genevieve O’Reilly as Mon Mothma, Stellan Skarsgård as Luthen Rael, Fiona Shaw as Maarva Andor, Denise Gough as Dedra Meero and Kyle Soller as Syril Karn. Set before the events of Rogue One, in the years prior to Princess Leia’s fateful capture by Darth Vader, it follows the formation of the Rebel Alliance in the ever-expanding Star Wars universe.