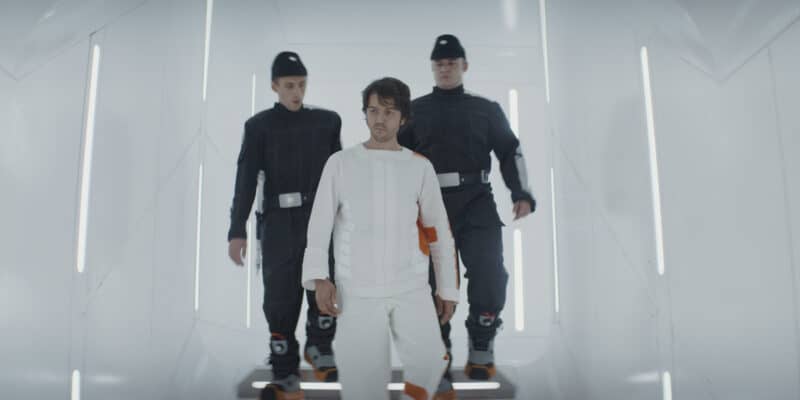 The last episode ended with Cassian Andor (Diego Luna), under his alter-ego Keef, being hauled off to incarceration, falling victim to the hottest buzzword of the episode, P.O.R.D. The Public Order Resentencing Directive is part of the Imperial answer to the Aldhani heist, allowing them to both up sentences and re-evaluate existing ones in an effort to quell the rising unrest.

As Cassian feels the pressure of the Empire’s boot firmly on the galaxy’s neck, at the ISB the net is closing in. After being somewhat vindicated last episode, ISB agent Dedra Meero (Denise Gough) is starting to map out how the rebellion is coming together. And on Coruscant, Mon Mothma (Genevieve O’Reilly) is continuing her weapons-grade small talk, attempting to stay afloat in a tide of political whisperings following the blow against the Imperial machine.

The episode title is dropped almost immediately on opening. It’s Cassian’s allocation for his prison sentence. Magnaclamped into a shuttle with a group of other prisoners, they land on a world of water, dotted with what is the recognizable brutalist grey of  Imperial facilities. As they disembark, a fellow member of the incarcerated urges him to breathe deeply — this might be the last fresh air they have for a while.

Imperial officers march towards them, wearing what appears to be chunky insulated footwear. They’re armed, but exercise minimal physical restraint in greeting and transporting the prisoners to their cells. Surprisingly, this isn’t down to the standard arrogance of the Empire; instead, they have developed a barbarically efficient system. The floors are weaponized and with the press of a trigger, anyone not insulated receives a crippling shock. “A minimally invasive enforcement technique”, as the officer describes it. They receive a demonstration of the power too, to really bring home the message.

It works. On the way to his work allocation, a checkpoint presents what would appear to be the perfect opportunity for an escape attempt: They are down a staff member to help with his transport, a weak point in the chain. You can see the cogs turning as Cassian ponders making an attempt to flee; but he lets the moment pass, no doubt remembering the pain of his experience in the corridor. He is escorted into a workshop, where tables upon tables of prisoners make use of mechanical equipment to manufacture parts for the Imperial war machine.

He’s greeted by the overseer for this room, and it’s a familiar face (even if he rarely wears his own on screen): Andy Serkis as Kino Loy. Kino is a prisoner just like Cassian, but with a difference. He’s been placed in charge of productivity for this room, Unit Five-Two-D, and they are pitched against others on the floor for a top spot. And within the room itself, the individual tables must compete: The top place receives the lucky prize of flavor in their food. There are no guards in the workshop, and Kino can run it as he likes. They are, for the most part, entirely self-governing.

“Don’t ever slow up my line”, Kino warns Cassian. At his allocated table, they are already behind, having been one man down for this 12-hour shift. Cassian doesn’t look ready to make much of an impact himself, overwhelmed by having to pick up the complex instructions for assembly. The men already look desperate, but as if they need further motivation, an announcement comes from higher up: a sprint section, meaning whichever table comes last will receive the shock treatment. And not just that, but his future Rebel compatriot, Ruescott Melshi (Duncan Pow) also makes a brief appearance, five years before their adventures in Rogue One: A Star Wars Story (2016).

At the ISB, Dedra has brought in Syril (Kyle Soller). He has been doing the equivalent of shopping at work; filing false reports in the Bureau of Standards databases to try and track down Cassian. It’s raised a red flag in the system, and Dedra has seen an opportunity to potentially get more information, that was not inputted into the official report. Syril has never read the whole thing, was only coerced into putting his name against it. So she gives him the file and ample reading time. In return, he gives her a vague description of the man spotted with Cassian and makes a bold pitch to be involved deeper in the investigation. She quickly shuts it down, warning him of his ambition.

In a meeting with Colonel Wulff Yularen (Malcolm Sinclair), Dedra lays out where she is at with her investigation. She’s identified one rebel agent at the heart of the incidents across the galaxy, codename: Axis (we know them as Luthen Rael, played by Stellan Skarsgård). Using the starpath Cassian left behind on Ferrix as a convincing prop, she appeals to have access to as many resources as the Empire can place at her disposal. She thinks finding the fugitive Cassian — the last person associated with Axis — is the key to cracking the entire operation. “Drill down, find Andor, get a hunt started,” Dedra pitches. Little do they realize, they already have him.

At Mon Mothma’s, she finds herself once again at the center of a political soiree. Her financial compatriot, Tay Kolma (Ben Miles), has bad news: The Empire is monitoring finances even more carefully, with auditors increasing by the day. Echoing her fears from last week, she is feeling ever more exposed as the rebellion gains notoriety. Mingling at the party, we gain an insight into how other senators are finding life under Emperor Palpatine. Where some see authoritarian cruelty, the Emperor’s supporters see security; where some see the risk in unlimited enforcement powers, others see measures to keep people safe. “If you’re doing nothing wrong, what is there to fear?” one senator says. “I’m fearing your definition of wrong,” Mon replies.

Similarly illuminating are the revelations of some of Mon and her consort Perrin Fertha’s (Alastair Mackenzie) shared history. They were married at 15, according to Chandrilan custom, and both knock back a traditional drink of a wriggling ‘squig’, a worm dropped into a glass of fizz. Mon expresses fatigue at both.

Back on Narkina 5, Cassian is at his bunk. The cells have no bars, only a line defining where they cannot step beyond. If they do, it could be lethal. Sleepwalking is a dangerous pastime on the wing. Fellow prisoner Melshi tries to warn him that thanks to P.O.RD, it’s unlikely they will ever get out. The Empire will keep them until the moment they are no longer of use. Cut to 30 shifts later, and Cassian — looking increasingly broken — is now far more accustomed to his place in the workshop’s machine.

On Ferrix, Bix (Adria Arjona) is visiting Maarva Andor (Fiona Shaw). Maarva has fallen and injured herself attempting to find out if access was still possible to the sewers between the hotel, now a fully-fledged Imperial garrison. She’s refusing to help, determined to be a self-sufficient rebel. Bix approaches Paak (Abhin Galeya) at his shop and asks to look for something in the back. In reality, she is using the secret comms equipment to try and reach the rest of the network, an attempt to let Cassian know his mother is ill.

Little does Bix know she is being monitored by the rebellion themselves. Vel (Faye Marsay) and Cinta (Varada Sethu) are staking out Ferrix in an attempt to find Cassian for themselves and tie up the loose end he represents. Their relationship is becoming increasingly strained as the rebellion ramps up: Vel wants them to commit more to one another. Cinta reminds her that she always made clear the struggle would come first.

And in Luthen’s shop, Kleya (Elizabeth Marki) is demonstrating that ruthless streak she revealed last week. Luthen wants to reply to Bix’s message, thinking it might be a lead to finding Cassian themselves; Kleya thinks they should shut it down, warning him that he is losing his sense of caution as their activities escalate. He reneges, and with the flick of a switch, the network on Ferrix is closed off. Bix is alone. The next day, a crowd has gathered at Paak’s Shop. He has been taken to the hotel for interrogation, and what’s more, they want to speak to Bix too. She makes a run for it.

We cut to Luthen’s Fondor starcraft landing on Segra Milo. He’s there to meet a familiar face from Rogue One:  Partisan leader Saw Gerrera. He is still the grizzled fighter, but slightly less mechanical than when we meet him in the movie. They both play a game complimenting the success of the Aldhani job, each alluding to the fact the other was responsible. Of course, we know Luthen is bluffing.

Luthen reveals the real reason for his visit. He has brought a number of parts Saw’s group could make vital use of, in exchange for one thing — Saw meeting a man named Anto Kreegyr, part of a plan to attack an Imperial power plant. Saw is unimpressed and no fan of Anto’s, a known separatist. He has a history against the faction, who were responsible for the war on his home planet back in the Clone Wars. He lists a series of the different movements and divisions within the rebellion, again a reminder that this is not yet quite an alliance. He asks Luthen to define who he is. “A coward,” Luthen answers.

On Ferrix, Bix has been captured and is about to be brought before Dedra. Before Bix enters the interrogation room, Dedra asks for Paak to be left in the chair. When Bix walks in, Dedra suddenly acts surprised, demanding Paak’s traumatized body be removed from the situation. It is theater, an ISB tactic to start Bix’s interrogation from the moment the door opens. Bix is locked into the chair previously occupied by Paak as the door slides closed on the room.

Back on Narkina 5, we are in the workshop. Cassian and his table are a well-oiled machine.

Moment Of The Week:

For me, it was the conversation between the senators in Mon Mothma’s party. Andor is largely focused on seeing the people who are within the machine of both sides go to work: Seeing how those in the political sphere, outside of Alderaanian princesses, handle the Empire’s rise is a fresh perspective.

What did you think of Andor Episode 8? Tell us in the comments below.
Andor (2022) is currently streaming on Disney+. Led by showrunner Tony Gilroy, it stars Diego Luna as Cassian Andor, Genevieve O’Reilly as Mon Mothma, Stellan Skarsgård as Luthen Rael, Fiona Shaw as Maarva Andor, Denise Gough as Dedra Meero and Kyle Soller as Syril Karn. Set before the events of Rogue One, in the years prior to Princess Leia’s fateful capture by Darth Vader, it follows the formation of the Rebel Alliance in the ever-expanding Star Wars universe.