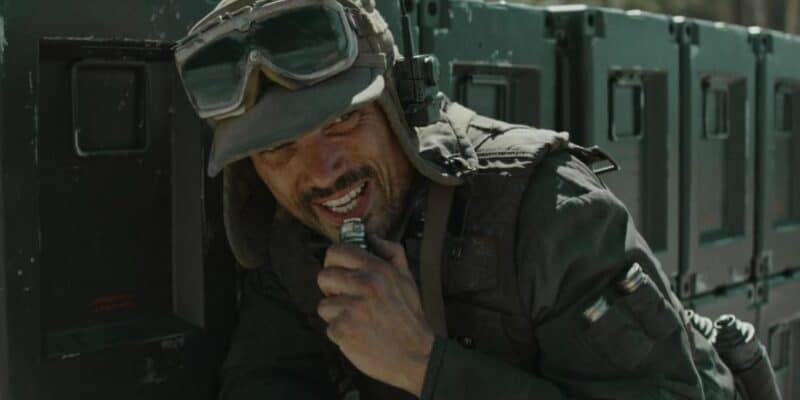 Cassian Andor (Diego Luna) is in prison. And a special kind of prison: one where there are no bars, but the floor is electrified. Where the prisoners must work, but they enforce themselves to do so. This is “Narkina 5“, the title of Andor Episode 8 and the name of the moon where our hero has been shipped off to for his incarceration.

While he toils away in the workshop, competing under supervisor Kino Loy (Andy Serkis) for his table to beat the rest and acquire flavor in their food (truly, is there anything more dystopian than that?), ISB agent Dedra Meero (Denise Gough) gets ever closer to finding both him and rebel organizer Luthen Rael (Stellan Skarsgård). Now in her clutches is Bix (Adria Arjona).

So what could be next? The answer may lie in a character who appears in this episode, someone who we know makes an appearance in Rogue One: A Star Wars Story (2016) — and I’m not talking about Saw Gerrera (Forrest Whitaker), although he will no doubt have an important role to play as the show unfolds. No, I’m talking about Ruescott Melshi (Duncan Pow), the prisoner who so desperately tries to tell Cassian that their incarceration looks set to be permanent under the new P.O.R.D (Public Order Resentencing Directive) the Empire has enacted in the wake of the Aldhani heist.

Melshi appears as a Sergeant in the Rebel Alliance in Rogue One, and we know he ends up being close with Cassian — close enough that he is willing to join him on the final suicide mission to Scarif, to steal the Death Star plans. Could a prison escape be how they forged such a strong bond? Or could it just be the trauma of their shared incarceration which brings them together?

Related: ‘Andor’ Delivers on a ‘Star Wars’ Element Never Before Seen In Live-Action!

If what showrunner Tony Gilroy told Empire magazine is true, this week’s episode represents the start of the latest three-episode arc. It’s safe to assume it will cover Cassian’s time in prison. Who knows if, by the finish, Dedra finally has him in her clutches, or will he and Melshi have made their escape by then? Right now, Cassian is easily within the ISB’s grasp — if only they knew they had him. Instead, he is imprisoned under his alias of Keef Girgo. And imprisoned without an easy escape.

Not only does the complex have those horrifying electrical deterrents, but it is also surrounded by a vast sea of water. When we see Cassian at the end of the episode, his spirit seems somewhat broken, and who can blame him? With the aforementioned episode structure, it’s safe to assume he and Melshi will remain in the prison for at least another two episodes.

One of his only hopes lies in how desperately the rebellion wants him too, even with their homicidal agenda to close off the loose end he represents. Could a daring prison escape courtesy of them be on the cards, assuming Luthen, Vel (Faye Marsay) and their allies manage to pick up on Cassian’s tail? It could be that the rebels decide to break him out if only to be able to ensure his silence themselves.

How do you think Cassian will escape his fate? Tell us in the comments below.
Andor (2022) is currently streaming on Disney+. Led by showrunner Tony Gilroy, it stars Diego Luna as Cassian Andor, Genevieve O’Reilly as Mon Mothma, Stellan Skarsgård as Luthen Rael, Fiona Shaw as Maarva Andor, Denise Gough as Dedra Meero and Kyle Soller as Syril Karn. Set before the events of Rogue One, in the years prior to Princess Leia’s fateful capture by Darth Vader, it follows the formation of the Rebel Alliance in the ever-expanding Star Wars universe.