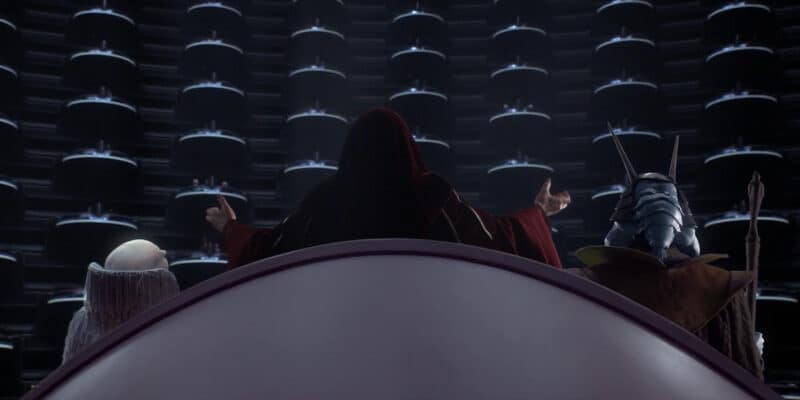 With more of Palpatine’s closest officials being teased by Mon Mothma and higher rank imperial officials appearing in Andor, it’s very possible that the Emperor will make a guest appearance in the series.

Related: ‘Star Wars’ Series Ruins One Scene With Too Much Subtlety

Diego Luna’s Andor has shown several different angles of the Star Wars universe, from gritty rebel attacks to the corporate sectors of Coruscant with the Imperial Security Bureau and the Imperial Senate with Mon Mothma.

These different aspects have allowed certain characters to appear, such as Colonel Yularen, and future episodes will include Forest Whitaker’s Saw Gerrera meaning that the series will have some great cameos. Surprisingly enough, Episode 7 name-dropped Palpatine numerous times, implying that the Emperor is closely monitoring the situation.

While Darth Vader appearing in the show would be a bit overkill, Andor could easily show a hologram of the Emperor talking to the ISB or have him appear in the Senate for a special presentation. All of these are possible, especially since Mon Mothma confirmed that Sly Moore and Grand Vizier Mas Amedda are spying on her.

Seeing those characters appear would be fascinating, as their last live-action appearance was in Star Wars: Episode III — Revenge of the Sith (2005). Mon Mothma’s interactions with the Empire should soon pit her against some well-known Star Wars villains and create some amazing scenes as her plans to take money from her family fortune could go poorly.

Palpatine’s presence in the series will mostly stay like a shadow as the Empire is hovering over the lives of many civilians, ready to kill them if any insurrection occurs. Even propaganda including Ian McDiarmid’s voice, would be enough for some fans, but Andor does seem like a show where the Emperor can appear briefly.

There’s still a lot of the season left, and with Season 2 focusing on exploring Cassian’s time with the Rebellion across four years, Season 1 is probably the only time we could see Palpatine in the series. Since the Empire hasn’t faced many threats in the past ten years, it would be interesting to know what Darth Vader is up to because he might not be done hunting Obi-Wan Kenobi.

Palpatine’s role could give fans an idea of what to expect from the second season of Obi-Wan Kenobi if Lucasfilm decides to greenlight another season, and it would definitely create a lot of hype for the series. Both Disney Plus projects overlap, but fans shouldn’t expect Inquisitors to appear unless the Rebel Alliance harbors a Jedi like Cal Kestis.

Related: ‘Star Wars’ Series Scraps Normal Perspective On the Empire For One Scene

Did you notice that Colonel Yularen appeared in the episode? Do you think he will have another appearance in the series?