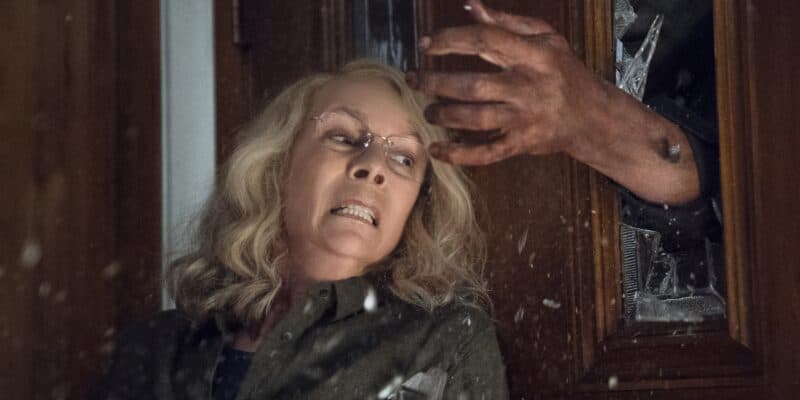 There’s no denying that Jamie Lee Curtis is the definitive “Scream Queen”. Not only has she played Laurie Strode seven times, having first appeared in John Carpenter’s original Halloween (1978), her character spans numerous timelines within the Halloween franchise.

Now, with Halloween Ends (2022) finally out in theaters, here are all of Jamie Lee Curtis’ Halloween performances ranked from worst to best…

There are major spoilers ahead for Halloween Ends.

Halloween: Resurrection (2002) finds Laurie residing in a mental institution, where she has been waiting patiently for the return of Michael Myers (Brad Loree). That’s right — the film completely retcons the end of Halloween H20: 20 Years Later in which Laurie kills Michael (Chris Durand).

But while there’s a case to be made that Halloween: Resurrection has some “Dangertainment” value, it remains one of the low points of the entire franchise, largely because it kills off Laurie Strode herself within the first 10 minutes. Needless to say, she doesn’t have much to do here.

Halloween II (1981) is the only movie in the Halloween franchise that feels like that 1978 original from John Carpenter. It picks up on the same night as we follow Laurie Strode to the hospital, where she’s treated for wounds sustained during her fight against Michael Myers (Nick Castle).

But Michael Myers (Dick Warlock) soon arrives at the hospital to find Laurie, who we learn is his sister. This is easily one of Curtis’ less memorable performances, though, as she doesn’t speak all that much. It’s also a shame that we never get to see her realize she’s the bogeyman’s sister.

Jamie Lee Curtis gets to do a lot more talking as Laurie Strode in Halloween Kills (2021), though, the follow-up to David Gordon Green’s Halloween (2018). However, this is the third version of Laurie Strode Curtis has played in the franchise (fourth if you separate H20 and Resurrection canonically, which many fans tend to do) .

Like Halloween II, Halloween Kills finds Laurie spending all of her time in hospital after being stabbed by Michael Myers (James Jude Courtney). The difference is that Laurie has a ton of lines, most of which are cheesy, melodramatic, and sound like they were written for the trailers. Worst of all, though, she never once comes face to face with Michael in this film.

Yes, yes, we know — why isn’t Jamie Lee Curtis’ first outing as Laurie Strode in the top spot? The truth is that, while John Carpenter’s Halloween is a bonafide horror classic that gave birth to the entire slasher subgenre, unfortunately the acting isn’t all that great.

That’s not to criticize Curtis’ performance specifically, but the acting all round feels a little undercooked. Does she take a decent-enough “stab” at the role, though? Of course, else she wouldn’t have gone on to become horror’s most iconic and beloved final girl.

Despite all the negative reviews Halloween Ends is getting, one of the more positive aspects that fans and critics seem to agree on is Laurie Strode. While the movie does sideline Michael Myers (James Jude Courtney), it would be a lie to suggest that Laurie gets the same treatment.

This is the most humanized version of Laurie Strode we’ve since John Carpenter’s original. Halloween Ends deals with themes of transformation, and since Halloween Kills (2021), Laurie has taken on a more positive outlook. But beneath the surface, the final girl within her is ready for one last fight.

Halloween (2018) ignores every single Halloween sequel that followed the original 1978 film, largely because the filmmakers wanted to wipe the slate clean and do away with the Laurie/Michael sibling connection, while also not having to deal with all the messy sequels.

As a result, we have a Laurie Strode who is untethered to Michael Myers — except for a lifelong obsession that has fractured both her soul and her family, of course. This version of Laurie has a broad range of emotions, from a terrified manic depressant to a cunning and hardened fighter who is ready for round two with Michael.

Many fans would agree that the version of Laurie Strode we get in Halloween H20: 20 Years Later (1998) is by far the most superior to any other on this list. In the 20 years that have passed since Halloween and Halloween II, Laurie has faked her death and changed her identity.

Laurie Strode is now Keri Tate, the headmistress of a prestigious private school in Northern California, but she’s still haunted by the bogeyman of her past. And though there are similarities between this Laurie and that of Halloween (2018), this one is easily the most realistic.

How would you rank all of Jamie Lee Curtis’ Halloween performances? Let us know in the comments down below!