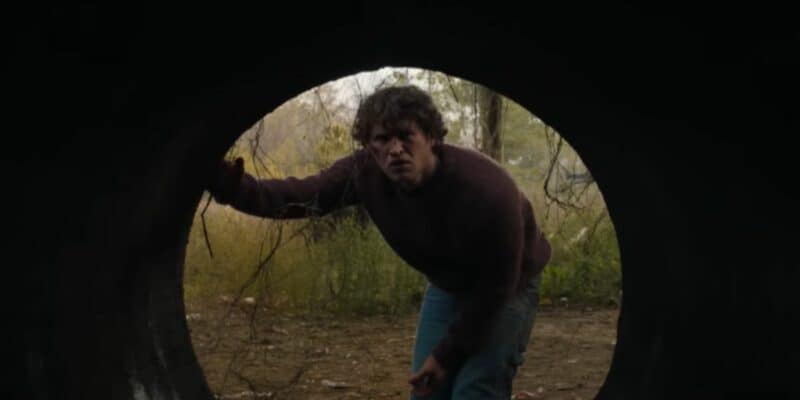 Halloween Ends (2022) is allegedly the final movie in the franchise, and though this probably won’t end up being the case, it still marks the end of an era, as it not only concludes David Gordon Green’s new series of Halloween movies, it’s also the last time we’ll ever see the legendary Jamie Lee Curtis as horror’s most iconic “final girl” Laurie Strode.

The thirteenth movie in the franchise is currently dividing fans and critics (although NBA legend LeBron James loves it!), but whatever you might think of the film, there’s no escaping the fact that it has some of the most shocking moments in the entire Halloween franchise. If you thought Halloween Kills (2021) was a chaos-fuelled freight train of carnage, you ain’t seen nothing yet!

Here are the five most shocking moments from Halloween Ends…

Warning: There are many major spoilers ahead for Halloween Ends!

The Halloween movies are known for their “cold openers”, which, in this timeline at least, have included Michael Myers killing his own sister Judith Myers (Sandy Johnson), investigative journalist Aaron Korey (Jefferson Hall) trying to provoke a reaction out of Michael at Smith’s Grove State Hospital with his mask, or a flashback that takes us all the way back to 1978.

But nothing will prepare you for Halloween Ends‘ prologue, which sees teenager Corey Cunningham (Rohan Campbell) babysitting young boy Jeremy Allen (Jaxon Goldberg). All seems well at first, until Corey goes into the kitchen to make some food, where he hears some commotion from the living room, from which Jeremy has mysteriously vanished.

Armed with a kitchen knife, Corey investigates further noises upstairs, but Jeremy appears and winds up locking Corey in a top floor as part of a spiteful prank. In a claustrophobia-induced panic, Corey kicks open the door, which hits Jeremy and sends him tumbling over the two-storey mezzanine, fatally crash-landing in the hallway below just in time for his parents to see.

4. The Transference of Evil

There have been many surprising moments throughout the Halloween franchise where Michael Myers is concerned. Beyond the first two movies, Halloween (1978) and Halloween II (1981), some of the sequels have featured some really bizarre moments, which have included Michael crying, speaking, and being roundhouse-kicked by rapper Busta Rhymes.

David Gordon Green’s Halloween movies, which started with Halloween (2018), take more of a back-to-basics approach, with Michael appearing to be nothing more than a man in a mask. And though Halloween Kills suggested that Michael Myers is supernatural, director David Gordon Green put this idea to rest following the film’s release.

In Halloween Ends, however, the scene in which Corey Cunningham first encounters Michael Myers (James Jude Courtney) in a sewer system, throws Green’s comments out the window entirely, as the two appear to share a psychic connection (though it’s never really explained), as Corey’s life flashes before his eyes, which results in him taking on a sort of Michael Myers persona.

After Corey’s encounter with Michael Myers, the two develop some sort of unspoken agreement (which, on Michael Myers’ part, probably works quite well seeing as he never speaks). Michael continues to reside in the sewer system, where he has been hiding out for four years and taking in the odd victim from time to time, according to a nearby homeless man.

However, he appears in bad shape (no pun intended), most likely from the mob attack in Halloween Kills, and most likely from malnourishment, no doubt by the absence of both food and killing people. But when Corey lures Allyson’s ex-boyfriend Doug Mulaney (Jesse C Boyd) into the sewers, Michael kills him and seemingly goes through a regeneration of sorts.

We don’t see any proof of this, and it’s possible it’s all in Michael’s head, but nevertheless, he finds strength from the kill. Either way, it’s shocking to see Michael Myers in a partnership of sorts with someone he wouldn’t have hesitated to kill in the previous film. There’s even a scene in which Corey wrestles him to the ground to steal his mask. Big mistake, of course.

It might seem a little odd to suggest that there are a series of kills in a Halloween movie that you might find quite shocking. After all, now that we’ve seen Rob Zombie’s Halloween II (2009) and Halloween Kills, both of which are easily the most brutal, disturbing, and violent entries in the entire franchise, perhaps we’re a little desensitized to Halloween.

But Halloween Ends, despite having nowhere near as high a body count as its 2021 predecessor, still delivers shock-value in spades. While the most shocking deaths in the film are easily those of Jeremy Allen and Haddonfield radio DJ Willy the Kid (Keraun Harris), the sequence that will inevitably be dubbed the “Junkyard Massacre” is full of nasty surprises.

When a gang of bullies arrive at the junkyard where Corey Cunningham works, intent on continuing to verbally and physically abuse him, little do they realize that a new Michael Myers has emerged (Corey has just stolen Michael’s mask). And what follows is a series of sadistic slayings, particularly one that involves a blowtorch…

It doesn’t get any more shocking than this. For decades, a certain myth has floated among the fanbase which suggests that there’s a clause in the contract for Halloween movies that forbids Michael Myers being killed off on screen. Whether or not this is actually true will probably never come to light, but it has previously been contradicted.

With that said, two out of those films were followed up by sequels that retconned his deaths. As such, it’s not impossible to undo the death of Michael Myers. However, in Halloween Ends, after getting his throat and wrist slashed by Laurie, Michael Myers is placed in an industrial shredder, for all for all the residents of Haddonfield, and audiences, to see.

Yep, there’s no coming back from that.

What did you find the most shocking in Halloween Ends? Let us know in the comments down below!

Comments Off on 5 Most Shocking Moments In ‘Halloween Ends’