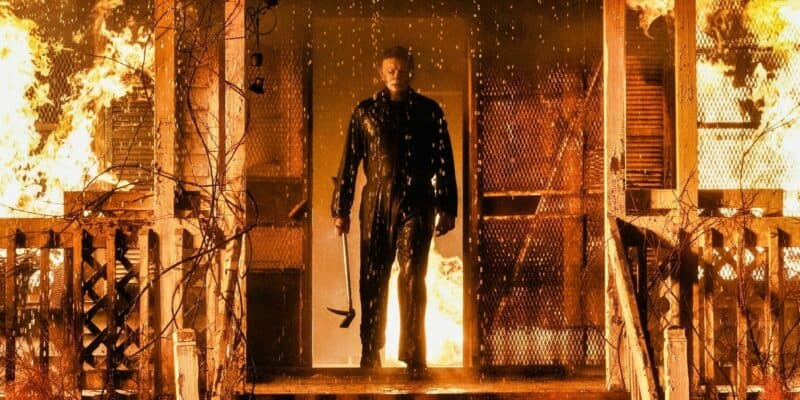 Halloween Ends (2022) is now just weeks away from release, so marketing for the movie is at an all-time high. From trailers to TV spots, fans are getting more than their fair share of snippets of the upcoming trilogy-topper, which will conclude David Gordon Green’s Halloween Trilogy.

The film will see the return of Laurie Strode (Jamie Lee Curtis), Allyson Nelson (Andi Matichak), Officer Frank Hawkins (Will Patton), and Michael Myers (James Jude Courtney), all of whom appeared in the previous two installments Halloween (2018) and Halloween Kills (2021).

However, there is one character who hasn’t appeared in any of the promotional material so far, including the official trailer. The character in question made a surprising return in last year’s Halloween Kills, having only ever appeared in the original 1978 film by John Carpenter up until that point.

Kyle Richards, best known for reality show The Real Housewives of Beverly Hills (2010), reprised her role as Lindsey Wallace in Halloween Kills, having played her in the first movie 44 years ago. Fortunately, she also made it out of last year’s film alive, so naturally, fans have been wondering whether or not she would return for Halloween Ends.

Well, wonder no more, because Jamie Lee Curtis, who plays Laurie Strode in the Halloween movies, has confirmed the return of Lindsey Wallace via her official Instagram account. However, it seems there’s a lot more than meets the eye with this cryptic new image from Halloween Ends. Curtis has also included a caption above the image that reads:

“In the @halloweenmovie@kylerichards18 returns as Lyndsay. She and her character have been doing this as long as I have. I wonder if her tarot cards saw this longevity in our futures? @halloweenmovie”

You’re no doubt excited to see Lindsey Wallace’s return confirmed, but you’re probably just as confused as we are. Yes, Lindsey, who is surrounded by candles, is holding a tarot card, and is sporting very different attire to what we saw her wearing in Halloween Kills.

In other words, Wallace looks gothic, so it’s reasonable to assume that she has turned to some sort of mystic arts in the four years that have passed since Halloween Kills. But what does this mean? Could David Gordon Green’s Halloween Trilogy finally be addressing the elephant in the room?

Halloween (2018), the first in this new series of films, refreshingly took things back to basics, ignoring every single Halloween sequel since the original 1978 film, most of which attempted to offer a supernatural explanation behind Michael Myers’ evil nature.

However, Halloween Kills quickly turned things on their head, as Michael Myers was, in a sense, portrayed to be supernatural, able to take seemingly fatal blows from Haddonfield residents without consequence, despite director David Gordon Green claiming that Myers is indeed a mortal man who is capable of “extraordinary things”.

Exactly how Halloween Ends intends to wrap things up is unknown, but it’s possible that the filmmakers have decided to try and offer their own explanation behind Michael Myers. And this new image of Lindsey Wallace in mystic surroundings certainly lends to the possibility that Halloween Ends is about to take off its own mask.

And then there’s the caption above the image from Jamie Lee Curtis, which says, “She and her character have been doing this as long as I have. I wonder if her tarot cards saw this longevity in our futures?” Could this image be pointing towards the supernatural, or will Lindsey Wallace simply offer some interesting metaphors about good versus evil?

Where Halloween can go beyond here remains to be seen, but producer Jason Blum recently said that there will be more Halloween movies. However, once this new Halloween Trilogy is done and dusted, Blumhouse Pictures will no longer hold the rights.

Original Halloween (1978) director John Carpenter has also said that it would be wise to expect more Halloween movies, especially if Halloween Ends performs as well at the box office as its two predecessors, Halloween (2018) and Halloween Kills, which collectively grossed over $386 million worldwide.

Do you think Michael Myers will finally catch up with Lindsey Wallace in Halloween Ends? Let us know in the comments down below!