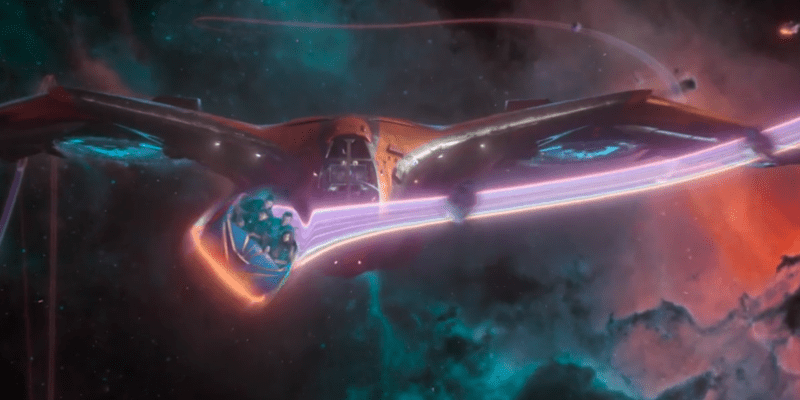 When a Guest approaches Guardians of the Galaxy: Cosmic Rewind in the newly reimagined Future World, now partly World Discovery, they will face a Xandarian Star Blaster, and beyond that, the Wonders of Xandar pavilion laden with treasures from the Terran and Xandarian alliance, and presided over by Glenn Close’s Nova Prime Irani Rael and Terry Crews’ Centurion Tal Marik of the Nova Corps.

It is Walt Disney World Resort’s newest attraction, boasting first-of-its-kind omnicoaster ride vehicle roller coaster technology and classic songs fans have come to associate with the Guardians from their tenure in Kevin Feige’s Marvel Cinematic Universe. But, in just under three months The Walt Disney Company and Marvel Entertainment will release a new version of Cosmic Rewind for fans to enjoy.

Out of Magic Kingdom, Disney’s Animal Kingdom, Disney’s Hollywood Studios, and EPCOT, it is the latter that is currently facing the biggest development project. After changing Future World into three separate neighborhoods — World Celebration, World Discovery, and World Nature — to blend with the already existing, and popular, World Showcase, the Central Florida Disney Park continues to restructure and alter the areas surrounding Spaceship Earth.

The debut of Guardians of the Galaxy: Cosmic Rewind on May 27, 2022, came after years of updates, primarily from Imagineer Zach Riddley, and gave Disney World Guests a much-need dose of wow. Motion sickness claims aside, the attraction has been positively received, with many riders complimenting its originality, inclusion of music, and MCU stars like Chris Pratt (Peter Quill/Star-Lord), Dave Bautista (Drax the Destroyer), and Bradley Cooper (Rocket Raccoon).

Cosmic Rewind currently operates as a virtual queue and Lightning Lane option only; it is likely the attraction will eventually switch to a standby queue like Star Wars: Rise of the Resistance did at Disney’s Hollywood Studios, once demand has quietened — although, with large crowds, Park Pass reservations selling out, and Disney Genie+ not promising multiple ride options, that could be a while away.

The Disney Resort is celebrating its 50th anniversary, The World’s Most Magical Celebration, and this teamed with the fact that Disney Parks when largely unvisited due to pandemic closures and reopening protocols, fans are flocking to the magic. However, if a Guest misses out on riding Guardians of the Galaxy: Cosmic Rewind, or has no plans to visit Disney World before November 2, Disney-owned Marvel Comics will be releasing a one-shot comic book based on the new attraction.

Appropriately titled Guardians of the Galaxy: Cosmic Rewind #1, the one-shot from writer Kevin Shinick and artist Gerardo Sandoval focuses on efforts by the government of Xandar to build a Xandarian Pavilion on Earth (just like the Xandarian Pavilion that accompanies the Guardians of the Galaxy: Cosmic Rewind attraction at Epcot Center).

Peter Quill tries to guide the Xandarians – and his fellow Guardians of the Galaxy – on a tour of Earth. But while the team is distracted, a cosmic Celestial arrives to enact a plan to full-on destroy the Earth, leading the Guardians to kick back into action to save the day.

The collectible nature of Marvel Comics teamed with the demand for Disney Parks merchandise might make this “Guardians of the Galaxy: Cosmic Rewind” comic book a must-have for millions of fans.

Will you be picking up “Guardians of the Galaxy: Cosmic Rewind #1” this November? Let us know in the comments down below!