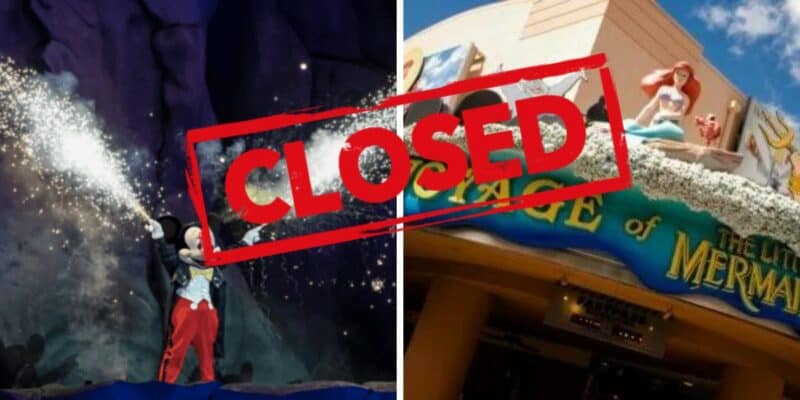 Many Walt Disney World offerings are currently unavailable to Guests. Here is a list of everything closed as of August 9, 2022.

When Bibbidi Bobbidi Boutique reopens, there will be some changes, including what the “Fairy Godmothers in Training” will now be calling themselves.

As Fantasmic! currently remains closed to Guests, for now, Imagineers are working hard on getting the nighttime show ready for its return. When it returns, as we previously mentioned, the show will include a new sequence. Disney Parks Blog confirmed the changes coming to Fantasmic!, writing:

Canada Far and Wide in Circle-Vision 360

In Canada, Canada Far and Wide in Circle-Vision 360 has just been revamped to add narration done by Schitt’s Creek actors Eugene Levy and Catherine O’Hara. However, on June 27, the attraction closed and according to the Walt Disney World website. there is no reopening date.

Enchanted Tales With Belle remains closed to Guests, and there is currently no return date, according to the Walt Disney World website.

Disney World describes this offering as:

Step into Belle and Maurice’s quaint country cottage and marvel at the charming decor. Next, tour Maurice’s workshop, where you’ll see his inventive gadgets—and a special enchanted mirror the Beast gave to Belle. Say the magic words and the mirror comes to life!

Watch the story of how Belle and the Beast met, and then behold the walls disappear before your eyes as you are magically transported to the Beast’s castle.

Meet the Enchanted Wardrobe, who will help selected participants prepare for their role. Which of you will play the Beast? Guests of all ages may volunteer!

Unfortunately, we still do not have a reopening date for the Walt Disney World Railroad, meaning the attraction remains closed indefinitely.

Voyage of the Little Mermaid

Before the pandemic, Guests could relive the tale of The Little Mermaid at Disney’s Hollywood Studios by visiting Voyage of the Little Mermaid. When visiting, Guests could hear Ariel sing “Part of Your World,” and watch Sebastian, Flounder, Ursula, Prince Eric, and more come to life in front of their eyes.

However, Voyage of the Little Mermaid has been closed for over a year, with no word on when it will return, which made many speculate the show would close permanently.

Disney did confirm that ‘Voyage of the Little Mermaid’ at Disney’s Hollywood Studios is not closing down, however, we have yet to see the show return.

Which of these offerings would you like to see return to Disney World soon? Let us know in the comments below.