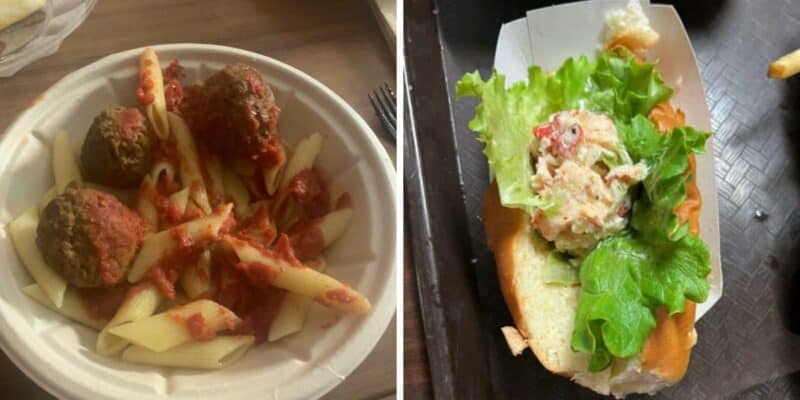 Ever since, Disney Guests have been complaining about the quality of food at Disney restaurants. Here are the various ways Guests and fans have noticed the food portions being cut.

One Disney World Guest visited Columbia Harbor House at Magic Kingdom and ordered a lobster roll, which clearly did not look like the advertised photo and led to disappointment and frustration.

Columbia Harbor House is located inside Magic Kingdom at Walt Disney World and is a quick-service restaurant that offers a variety of food items, but is best known for its iconic and fan-favorite lobster roll sandwich.

As seen in the image above, the lobster roll comes with a heaping scoop of chilled lobster and is served on a New-England style bun. The meal comes with a side of french fries and costs $16.99, which seems reasonable for the amount of lobster seen in the photo.

However, on a recent trip to Columbia Harbor House, Disney World Guest Marlene did not receive what was advertised.

Marlene sent the following photo (below) to Inside the Magic and explained that after receiving this shocking and extremely disappointing menu item, she complained to the Disney Cast Member at the register.

The Cast Member did bring her an extra lobster roll sandwich to make up for the portion size, but unfortunately, Marlene said the second sandwich was just as bad as the first one.

The iconic Mickey-shaped snack, Mickey Beignets, were also a victim of food portion cuts as one fan shared a photo of a thin and completely hollowed beignet, adding that Disney wasn’t kidding when they said they were cutting portions.

WTF Disney, you weren’t kidding about cutting portions. from Disneyland

A Walt Disney World Guest recently posted a photo to Reddit of their meal from the quick-service location at Disney’s Pop Century. The Guest ordered the penne pasta and meatballs meal. The meal was served in a bowl, along with a breadstick and cost $12. However, the meal was lacking tomato sauce and the Guest was not happy with how their meal was presented.

The following photo was posted to Reddit along with the caption “This was $12. They don’t believe in sauce apparently.”

This was $12. They don’t believe in sauce apparently. from disneyparks

Other Disney fans are not hesitating to comment their thoughts on the photo, most in agreement with the original poster. One user said:

And another user chimed in, writing:

Be Our Guest at Magic Kingdom

A few years ago, Be Our Guest restaurant in Magic Kingdom at Walt Disney World switched to a prix fixe service. What this means is that instead of ordering off of a regular menu and paying for appetizers, entrées, and desserts separately, Guests now pay one price that includes the choice of one appetizer, one entrée, and one dessert.

Despite this change occurring a few years ago, a new photo has surfaced on the social media platform, Reddit, and is causing a lot of Disney fans to speak out about how they truly feel about the new prix fixe service compared to the old, regular menu at Be Our Guest.

Reddit user UnderwhelmingPickle shared a photo of their meat and cheese plate appetizer at Be Our Guest recently, which you can see below. The post has caught the attention of many other Disney fans as several people were quick to respond and share their thoughts on the new prix fixe service.

Be Our Guest appetizer – meat and cheese plate from WaltDisneyWorld

Now, keep in mind that because the restaurant now offers prix fixe, the appetizer shown in the image above is meant only for one person and not meant to be shared. With that being said, a good deal of fans still felt underwhelmed with the presentation of the food, especially being in such an elegant atmosphere.