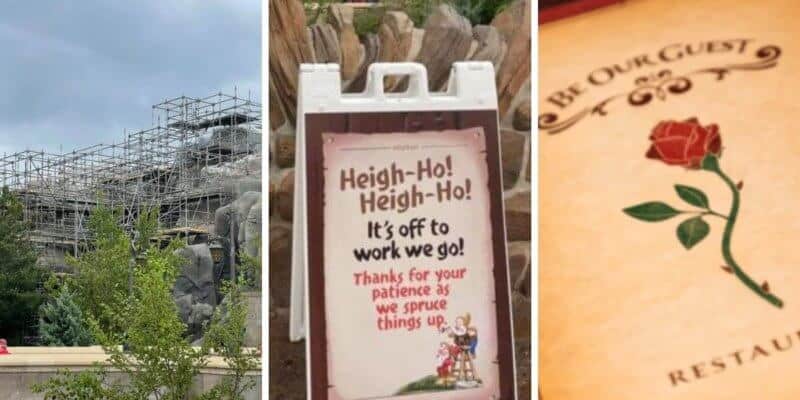 Be Our Guest in Fantasyland at Magic Kingdom has been a fan-favorite spot for Guests ever since it first opened in 2012. However, if you plan to visit this restaurant in the near future, know that there is a ton of construction work going on.

Back in June, we reported on a permit filed which was for “general construction” for the area that is home to Be Our Guest, Gaston’s Tavern, and the restrooms nearby. We speculated that the permit could have been filed so that the theme park could transform this area to commemorate 50 years of magic at Walt Disney World.

Though Disney has not announced exactly what will happen with Beast’s Castle, Be Our Guest, or Gaston’s Tavern, on a visit to Magic Kingdom in late July, we noticed that the construction had officially begun on Beast’s Castle!

More recently, we stopped by Magic Kingdom once again and noticed that the construction workers are striving to complete this project as more structural beams have been installed and have now completely taken over the iconic castle. Additionally, painting has begun on Beast’s Castle as well.

In the photos below, you can see the current construction work happening at this iconic restaurant and Fantasyland icon.

Are you excited to see construction happening near Beast’s Castle? Let us know in the comments below.