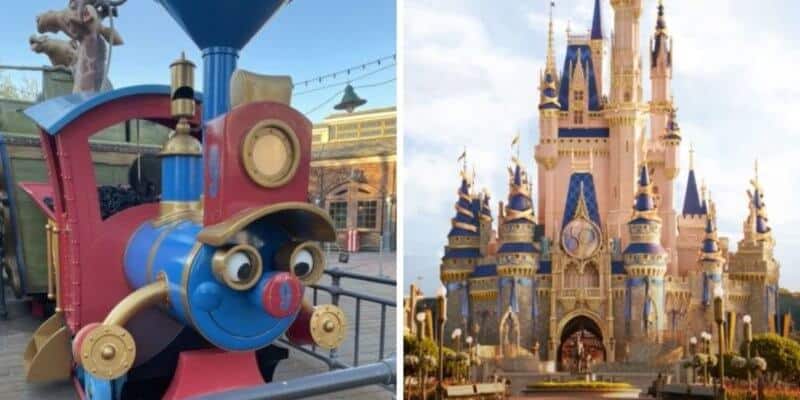 Magic Kingdom at Walt Disney World continues to prepare for its biggest and most magical celebration yet! This year, Walt Disney World is inviting Disney Guests to celebrate the 50th anniversary in all four parks!

Cinderella Castle in the Magic Kingdom looks absolutely stunning with new decor installed and shimmering new paint has been recently added onto many Fantasyland attractions including Prince Charming Regal Carrousel.

As Disney Imagineers and Cast Members continue to work around the clock, we recently noticed one section in Magic Kingdom that is receiving an adorable refurbishment.

Last month while visiting the parks, Inside the Magic noticed Disney refurbishments and magic happening around Magic Kingdom.

Casey Jr. Splash ‘N’ Soak located inside the Fantasyland section was still under some extensive cleaning and refurbishment as you can see in the photo below.

This popular locomotive is seen in the Disney film, Dumbo, and is loved by many young children and Disney adults. This Splash ‘N’ Soak section is themed off of Casey Jr. and became a way to cool off during the hot summers in Magic Kingdom. Disney describes this location as:

Come and see the coolest train in all the land! Kids can play and splash around this “wild” circus train—while parents relax, unwind and enjoy a cool break.

Casey Jr. lets off billows of refreshing “steam,” while circus animals—including monkeys, elephants and camels—may spray their visitors with water.

As we have shown previously, Casey Jr.’s water attraction was closed off and covered by greenery, but just recently, has been revealed to Disney Guests once again!

Inside the Magic noticed this week that Casey Jr.’s face is finally back after an extensive refurbishment and is ready to invite Disney fans back. It looks as though Disney Imagineers have given a fresh coat of paint to our beloved Dumbo train.

Some animals from Disney’s Dumbo have also returned including those sneaky spraying monkeys. There is still some work to be done as the giraffes and elephants are still hiding under some greenery.

Most likely these renovations are to enhance the look after its long exposure to the Florida sun and provide a better stream disperses to cool off Disney Guests this summer.

Furthermore, after reviewing the Walt Disney World Resort website, Disney has not announced when this Disney attraction will return as it is still temporarily unavailable. Disney Guests can agree that vacationing in Walt Disney World can be hard to enjoy as the summer heat approaches and this Fantasyland area definitely helps Guests cool off and is always busy.

We are hoping that with the 50th anniversary approaching this October, Disney will announce the return of Casey Jr. Splash ‘N’ Soak in Magic Kingdom very soon!

Do you miss Casey Jr. Splash ‘N’ Soak area in Magic Kingdom? Let us know in the comments below!

Do you need some advice planning your next Walt Disney World vacation? Want to learn about all the four Disney Parks and what they offer? Our friends at Academy Travel are EarMarked Diamond! Click the link for more info!