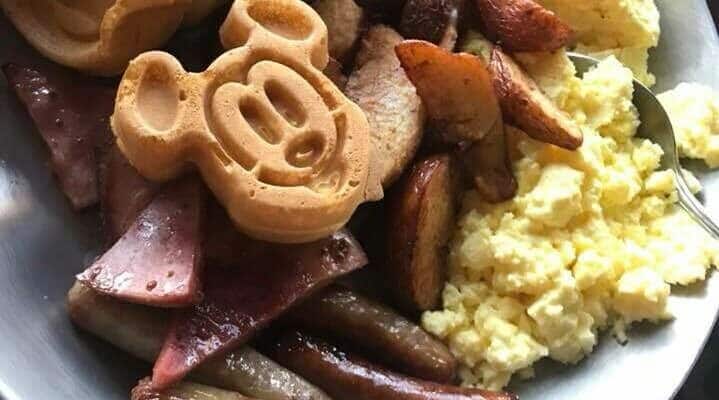 In November, Walt Disney Company CFO Christine McCarthy indicated that in order to start cutting costs, Disney plans to begin “reducing portions” at Disney Parks restaurants as it “would be good for Guests’ waistlines.”

Now, just a few weeks later, Guests are complaining about the quality of food at Disney restaurants.

The conversation began when one Reddit user shared their recent experience eating at Chef de France at EPCOT and Rainforest Cafe in Disney’s Animal Kingdom, writing:

Went to Chef de France at Epcot for lunch. Charcuterie plate used to be on an actual board and was just better quality in general. Now they throw a couple things together on a plate and it just looks and tastes cheap yet it’s like $17. I don’t mind paying higher prices but why is the quality lesser? I may be wrong but I also thing options have been removed from the menu over the years.

Noticed at rainforest cafe at animal kingdom they got rid of the cedar plank salmon which was great and just replaced it with shrimp and salmon which was average. Idk if that applies to other rainforest cafes but I have noticed just an overall lack of quality at Disney compared to years past. Does anyone else agree with this sentiment and what is the explanation? Prices going up, quality going down.

Another Disney fan also recently tried Chefs de France, and now they will never go back:

I thought Chefs de France was terrible this past June. Probably never go back after that. Too many other enjoyable options in an excellent foodie park.

And others chimed in regarding Rainforest Cafe, with one user writing:

They’re horrible. You should only eat there if you have young children.

With another Disney fan chiming in, saying:

The original one before they franchised was pretty good. Food was fresh. It’s just microwaved frozen crap now.

One Disney fan and Reddit user did point out that both restaurants named in the original post — Chef de France at EPCOT and Rainforest Cafe in Disney’s Animal Kingdom — are owned by third parties, and not by Disney:

Both of those restaurants are actually operated by third parties, but I reckon it’s all the same problems, which are supply and staffing. There are shortages all over the food industry (all industries, really) and Disney is no exception. I hope the rest of your trip goes better!

However, this post has sparked conversations about other restaurants, some that are, in fact, owned by Disney. For example, one Reddit user said Cinderella’s Royal Table was “AWFUL”:

[…] It. Was. AWFUL. The quality was nothing better than you’d get from any walkup good service location. Except the dessert. You’re really only paying for the experience of dining in the castle and seeing all the Princesses. If those are bucket list things for you, then definitely go!! However, if princesses and being hungry after a meal aren’t your bag, check out something like Ohana or Storybook Dining.

And someone else explained how they noticed prices increasing with quality decreasing:

Just got back, prices are higher than ever for rapidly decreasing quality. Def part of the problem was timing but I’ve never had such poor CM experiences.

On the flip side, some Guests have found improvements at some restaurants and quick-service locations, including Regal Eagle BBQ at EPCOT as someone noted:

We just went a couple weeks ago and the food was excellent especially at Epcot. Regal Eagle BBQ at AA is a huge improvement over what used to be at that location. Overall the food and drinks have gotten better in the last 20 years I’ve been going.

You can check out the full Reddit thread here.