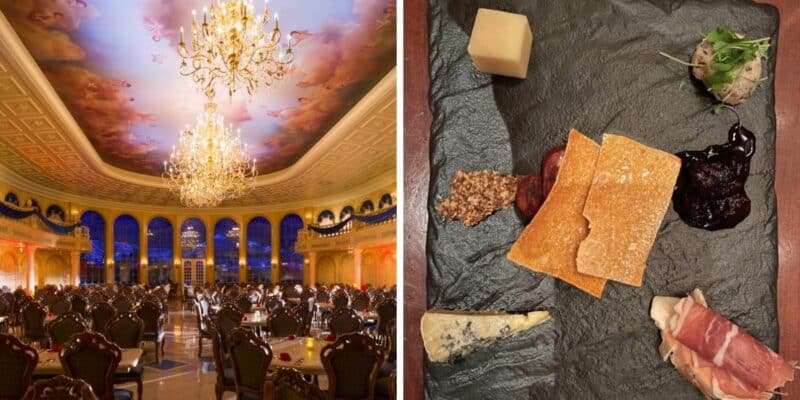 A few years ago, Be Our Guest restaurant in Magic Kingdom at Walt Disney World switched to a prix fixe service. What this means is that instead of ordering off of a regular menu and paying for appetizers, entrées, and desserts separately, Guests now pay one price that includes the choice of one appetizer, one entrée, and one dessert.

Despite this change occurring a few years ago, a new photo has surfaced on the social media platform, Reddit, and is causing a lot of Disney fans to speak out about how they truly feel about the new prix fixe service compared to the old, regular menu at Be Our Guest.

Reddit user UnderwhelmingPickle shared a photo of their meat and cheese plate appetizer at Be Our Guest recently, which you can see below. The post has caught the attention of many other Disney fans as several people were quick to respond and share their thoughts on the new prix fixe service.

Be Our Guest appetizer – meat and cheese plate from WaltDisneyWorld

Now, keep in mind that because the restaurant now offers prix fixe, the appetizer shown in the image above is meant only for one person and not meant to be shared. With that being said, a good deal of fans still felt underwhelmed with the presentation of the food, especially being in such an elegant atmosphere.

One Reddit user, Relic827, commented on the post saying how they miss the old menu and experience:

Agreed. I went a couple times back before it was prix fixe and it was an okay value then, but I will never go back at these prices.

Another Disney World fan and user, RaggedyMan2364, shared their recent experience with Be Our Guest, writing:

Our family couldn’t agree more. We got in on a walk-in reservation when we were over Spring Break. Our first time there. The entire family agreed that the atmosphere and experience were cool, but the food was sorely lacking and we would probably never go back.

And another fan, who goes by redditcommentt, said:

I just can’t wrap my brain around how it’s such a beautiful setting and ambience and they really have chairs, tables, place settings, food that looks right out of a backyard grad party

Regardless of all the backlash Be Our Guest received for this appetizer from Reddit users, UnderWhelmingPickle (the original poster) commented explaining the rest of their experience at the restaurant:

I’m a simple guy with simple tastes so random French cheeses and meats aren’t what I would usually pick. The steak was terrific and dessert was very good. $63 per person for adults and $39 for kids. We paid $300 for dinner but the experience was worth it. Won’t be going back again, however

Have you dined at Be Our Guest since the restaurant switched to a prix fixe service? If so, let us know about your experience in the comments below.