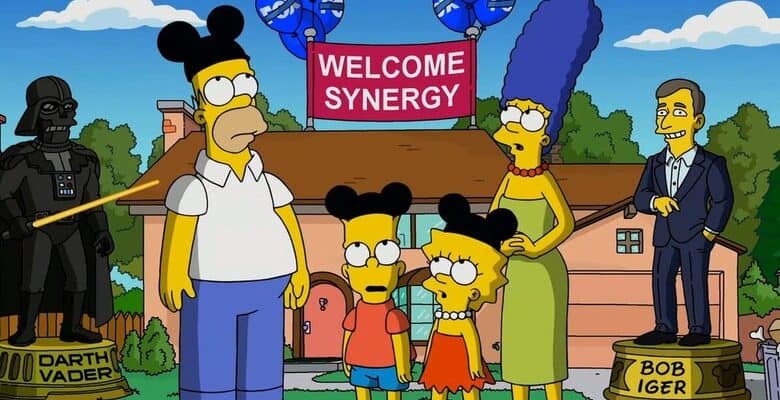 Matt Groening’s mega-popular animated series, The Simpsons, which now falls under the Disney banner after The Walt Disney Company acquired 20th Century Fox — now 20th Century Studios — in 2019, is known for its strange and correct predictions of world events. A 2020 list of 18 times The Simpsons predicted the future can be found at Business Insider.

Related: Will Universal Use Unfinished Bikini Bottom Plans to Replace ‘The Simpsons’?

Notably, the show predicted the closure of Disney Store locations at malls around America, and predicted scenes in Lucasfilm’s The Mandalorian series. Lucasfilm, and by virtue the Star Wars franchise, are also Disney subsidiaries, which means that Grogu and Pedro Pascal’s Din Djarin are Walt Disney Company-owned characters.

Over the years, in fact, whether or not the episodes accurately predict future events, the team at The Simpsons has spoofed a number of popular Disney characters, including the Marvel Cinematic Universe’s Loki (Tom Hiddleston) and Odin (Anthony Hopkins), Pinocchio, Alice In Wonderland, and Toy Story‘s Woody.

As it turns out, however, there’s one character Disney fans will never see spoofed on the popular animated show, which boasts 33 seasons. That character? Mickey Mouse.

Prior to Disney’s purchase of 20th Century Fox, the studio behind “The Simpsons,” the animated series frequently mocked Mickey Mouse and Disney’s clean-cut image. Bart notably wore faux-mouse ears in “The Simpsons Movie” and playfully referred to himself as a “mascot for an evil corporation.” A few years later, in the Season 26 episode “The Man Who Came To Be Dinner,” the family visit “Diz-Nee-Land” for a disastrous family trip.

Now, however, since the House of Mouse owns The Simpsons, the powers-that-be have banned future spoofs featuring Mickey.

As a matter of fact, when Disney called upon Groening’s team to help celebrate the anniversary of Disney+ with an episode called “The Simpsons in Plusaversary,” numerous characters like Tinker Bell, Cinderella, Donald Duck, Doctor Strange, Winnie the Pooh, Gaston, Elsa, and the Seven Dwarfs are hanging out at Moe’s Tavern.

Homer Simpson (Dan Castellaneta) tries to get inside the party but isn’t allowed as a result of his seeming lack of popularity on the streaming platform. Eventually, however, he gets an invitation from Goofy.

Mickey Mouse, however, is conspicuously missing from the installment — and now Simpsons fans know why.

“Mickey actually doesn’t exist, so we have Bart [Nancy Cartwright] playing Mickey and telling everybody to get back to work!”

More on The Simpsons

The official description of The Simpsons reads:

This animated comedy focuses on the eponymous family in the town of Springfield. The head of the Simpson family, Homer, is not a typical family man. A nuclear-plant employee, he does his best to lead his family but often finds that they are leading him. The family includes loving, blue-haired matriarch Marge, troublemaking son Bart, overachieving daughter Lisa and baby Maggie.

Did you know Mickey Mouse can’t be made into satire on The Simpsons?