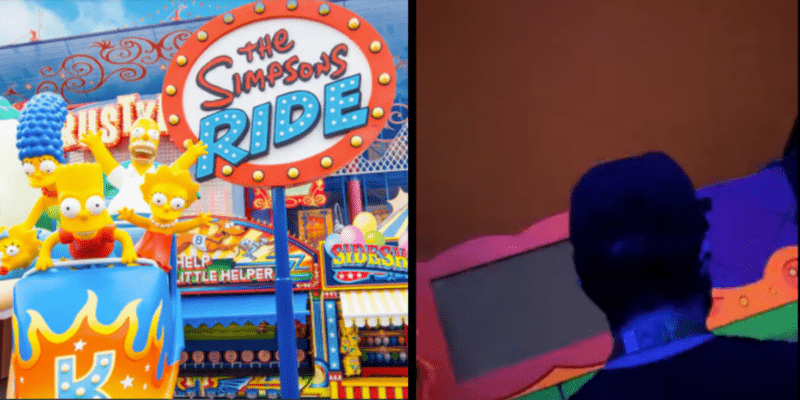 Universal Orlando Resort is currently in the midst of its busiest week of the year.

With holiday crowds in full swing, Guests are seeing wait times increase exponentially and crowds are expected to remain high through the rest of the week and into the new year.

While waiting in line is expected, waiting on an attraction after being stuck is probably not part of the plan for most.

Twitter user @mekenzix posted a video in which they had experienced a malfunction on The Simpson Ride.

@TheSimpsons@UniversalORL Universal get us offfffff… stuck on the simpsons ride, love life lol

As seen in the video above, the ride cart has lifted off the ground and is suspended there without movement. The big screen that riders watch as they go through the motion simulator is turned off and the viewing area– above the onboarding room– is completely dark. Of course, Universal Studios Team Members would have safely evacuated the Guests.

If you’ve never ridden The Simpsons Ride, seeing the big screen turned off may be confusing. Universal Orlando uses that round screen technology to allow multiple carts– all placed in rows beside one another on different levels– to ride and still experience the effects as if they were in the middle of the action.

The Simpsons Ride is one of four motion simulators at Universal Studios Florida along with Despicable Me: Minion Mayhem, Transformers: The Ride 3D, and Fast & Furious: Supercharged.

Next door, Universal’s Islands of Adventures hosts three motion simulators of its own in The Amazing Adventures of Spider-Man, Skull Island: Reign of Kong, and Harry Potter and the Forbidden Journey.

What’s your favorite motion simulator at Universal Orlando Resort? Let us know in the comments.