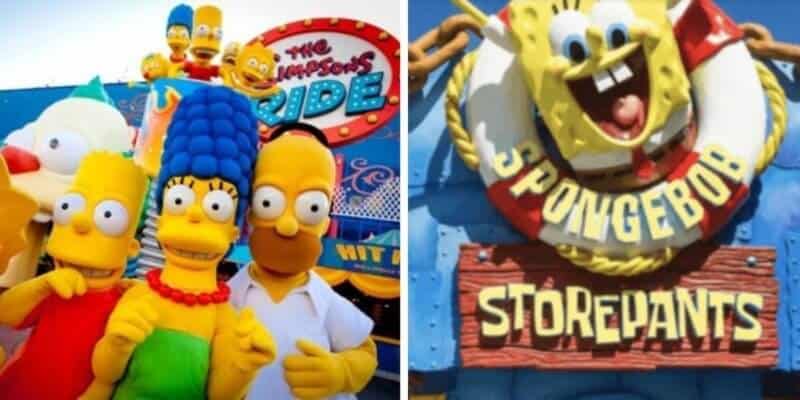 If you have ever been to Universal Orlando Resort, you may have realized that a lot of the IPs used to theme the park are not solely Universal content. To accomplish that, Universal has to rely on contracts that allow them to use alternate IPs that do not belong to them.

At Universal Studios Florida, Guests can enjoy The Simpsons by entering the world of Springfield in a carnival setting. The area includes a simulator ride that was once themed to Back to the Future, smaller rides for children, games, as well as many food locations that fit what Guests can see in the show, as well as Duff beer, of course.

Related: Why won’t Disney just give us adult content on Disney+?

The land is cheeky, colorful, and fun, however, Universal’s contract with 20th Century Fox — now 20th Century Studios — for theme park use of The Simpsons, which is now owned by The Walt Disney Company expires in 2028. It is not yet known if Disney will renew the contract with Universal.

Another IP that Universal uses is SpongeBob Squarepants! Guests can meet SpongeBob, Patrick, and the rest of the gang at Universal. Although the beloved Paramount IP is used at the park, there is not a large dedicated section to it, just a single store called SpongeBob StorePants. Now that Paramount has released a new SpongeBob series, this would be the perfect time for Universal to capitalize on the popularity of the IP, and they already have an existing blueprint for how to do it!

If Universal replaced The Simpsons with a Bikini Bottom area, the Orlando theme park could take the unfinished Universal Beijing plans and make use of them!

Universal Studios Beijing originally wanted to put in a Bikini Bottom to fill out a section of their park, to have a family-friendly animated area in the park. The area would have been highly interactive and would hold a Chum Bucket attraction, as well as a Mrs. Puff’s Boating School indoor ride. There was even going to be a creepy carnival section in Rock Bottom, which, at Universal Florida, would pay homage nicely to The Simpsons.

Because of the layout of The Simpsons area, there is already the opportunity to have a big SpongeBob ride, smaller kiddie attractions, as well as eateries to house some of the most classic food joints in the show. Imagine being able to sit at the Krusty Krab while eating a Kraby Patty with the secret sauce? The land would bring nostalgia to those who watched the show while it aired, as well as incorporate the younger generation who currently are watching the new version of the show.

It is not certain why the land never made it to Beijing, and whatever issues occurred there, could pose as an issue for Universal Orlando Resort as well.

Please note that this is all speculation and Universal has not announced any changes to The Simpsons area at Universal Studios Orlando.

Would you like to see a Bikini Bottom take over Springfield at Universal Studios?