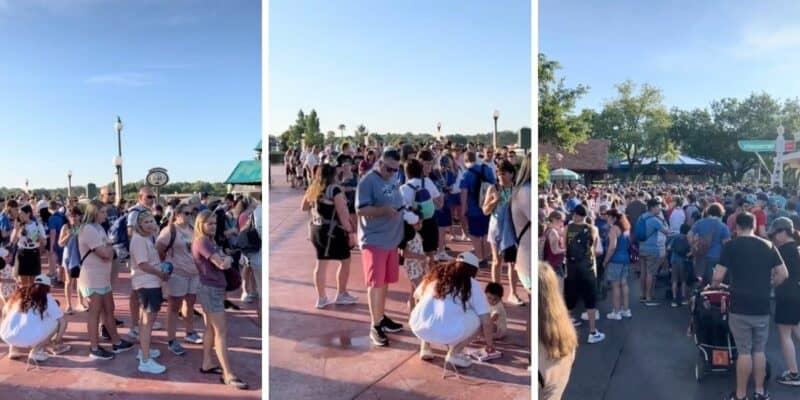 Guests poured into Magic Kingdom over the weekend at rope drop as families were eager to experience everything the Most Magical Place on Earth has to offer. With this being said, if you are planning on visiting Walt Disney World in the near future, you should be aware of the current crowd levels.

Disney World Guest and TikTok user, sincyplansdisney, posted a video of the rope drop process over the weekend.

This family got to the Park early, along with hundreds of other Guests who were seen lined up outside the Magic Kingdom gates. Once the Cast Members open the gates to the Park, Guests walk into Magic Kingdom where they were then scanned by a Cast Member to make sure they are staying at a Resort hotel. (The new Early Theme Park Entry offering allows Disney World Resort hotel Guests to enter any of the four Walt Disney World theme Parks early, on any day.)

After Guests are scanned, they make their way to their preferred part of the Park and then wait once again until Cast Members officially let Guests in and onto the rides and attractions.

Guests can also catch what many refer to as the 3 o’clock parade, Festival of Fantasy, which just recently returned to the Park.

At nighttime, Guests can watch the newly debuted fireworks show, Disney Enchantment, which replaced the now retired, Happily Ever After, for Disney World’s 50th anniversary.