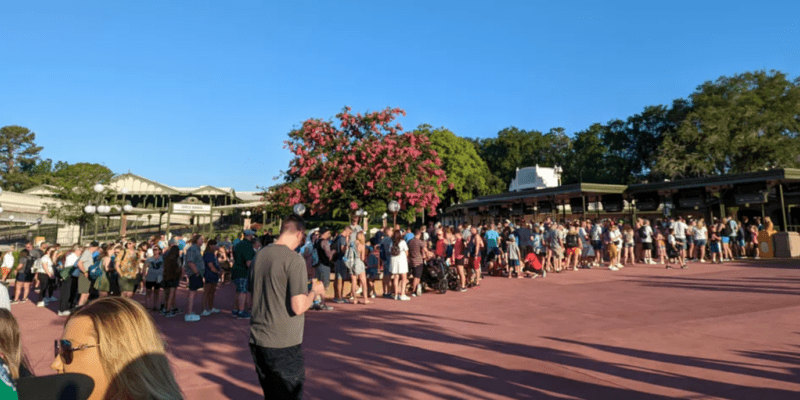 Guests poured into Magic Kingdom this morning as families were eager to experience everything the Most Magical Place on Earth has to offer.

With this being said, if you are planning on visiting Walt Disney World in the near future, you should be aware of the current crowd levels.

Magic Kingdom is filled with rides such as Pirates of the Caribbean, Jungle Cruise, Haunted Mansion, Big Thunder Mountain, Splash Mountain, “it’s a small world”, Space Mountain, and more. Guests were eager to ride some of these attractions today at the theme park as many families lined up outside of the ticket gates early this morning.

Disney World Guest and Reddit user, stitchfan, posted a photo of the ticket lines this morning, which shows a large number of Guests lined up in an attempt to enter Magic Kingdom.

In addition to riding rides such as Big Thunder Mountain, Jungle Cruise, Haunted Mansion, Splash Mountain, “it’s a small world”, Space Mountain, and others, Guests can also catch what many refer to as the 3 o’clock parade, Festival of Fantasy, which just recently returned to the Park.

At nighttime, Guests can watch the newly debuted fireworks show, Disney Enchantment, which replaced the now retired, Happily Ever After, for Disney World’s 50th anniversary.