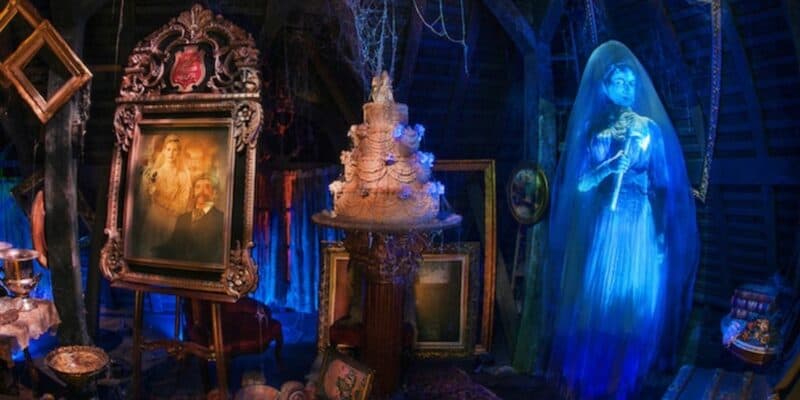 At Walt Disney World Resort and Disneyland Resort, one of the most beloved attractions is the Haunted Mansion. The attraction is iconic for Disney fans as Walt Disney himself had a hand in creating the original attraction in Disneyland, and is fluttered with characters that have very detailed backstories. Over time, Disney Guests have come to love each individual character that makes up The Haunted Mansion, so when one goes missing, many fanatics of the attraction will quickly notice.

As noted by Disney Wiki, the ride was “Originally conceived in the mid-1950s by Walt Disney as a walk-through ghost house, artist Harper Goff was tapped to conceptually design the attraction. The house originally had a rural American design and was intended to be at the end of a crooked path that led away from Disneyland’s Main Street, U.S.A.. Eventually, the decision was made to place it in New Orleans Square and thus the mansion’s exterior was themed as an antebellum home.”

Most recently, we reported a change in the Disneyland Haunted Mansion. There are a ton of animatronics in the Haunted Mansion that Guests love, such as the murderous bride, the Hat Box Ghost, the Hitch-Hiking Ghosts, and more. When Guests enter the graveyard, they are met with the gravedigger and his dog, but he now looks like he has aged! The character now has a beard on him, which was a noticeable change for many as he is a standalone statue that Guests see as soon as the enter the graveyard, along with his malnourished-looking dog.

Now, it seems one character is missing altogether. MagicbandManiac recently posted a photo of the mummy disappearing from the Haunted Mansion. Although the Disney Guest did not specify, it seems that this may very well be the Magic Kingdom version of the attraction.

The mummy from the Haunted Mansion is gone. I suspect it was taken by @OffhandDisney pic.twitter.com/n5y04gvHWU

DiscMan (@DiscMan2000) also Tweeted the same findings in late February. Both accounts tagged OffHand Disney, a Disney YouTuber who has done plenty of deep dives into the attraction.

Prince Amenmose is more than just a prop in the attraction, the mummy character actually has a full back story tied into him. As noted by Disney Wiki, the character is identified as “Great Overseer of Soldiers, Son of Glorious Thutmose I. He reveals himself to have been son of, ” Glorious Thutmose I, Bringer of Light, Conqueror of Nubia, Founder of the Great Canals”, unhappily married to his own sister Hapshetsut, and reanimated from death via necronomical magic.”

The story continues, “It is unknown when or how the prince died but he did so before his father meaning that he never inherited the throne. Following his death, he oddly received some repute and treatment which would otherwise be reserved for Pharaohs and Chief Queens. The location of his tomb and corpse is unknown with there being the possibility that it was taken and/or destroyed by grave-robbers or grave-robbing European colonists.”

Interestingly enough, the mummy character is likely the second-oldest inhabitant of the mansion, being preceded by Medusa and followed by Great Cesar’s Ghost, the Egyptian woman, and the Roman Soldier in the Ballroom. For now, it seems Guests will need to patiently await the return of the character.

Before Entering the Mansion
A musical crypt, a leaky tomb and a ghostly writer are among the creepy haunts you’ll find outside the main entrance. Explore supernatural hands-on experiences—only at Walt Disney World Resort—while you await your fate inside.
Too Scary?
The Haunted Mansion is dark and contains some mildly frightening scenes, but there is no gore, the ghostly residents are friendly and the ride is slow-moving.

Who is your favorite Haunted Mansion character? Let us know in the comments below.