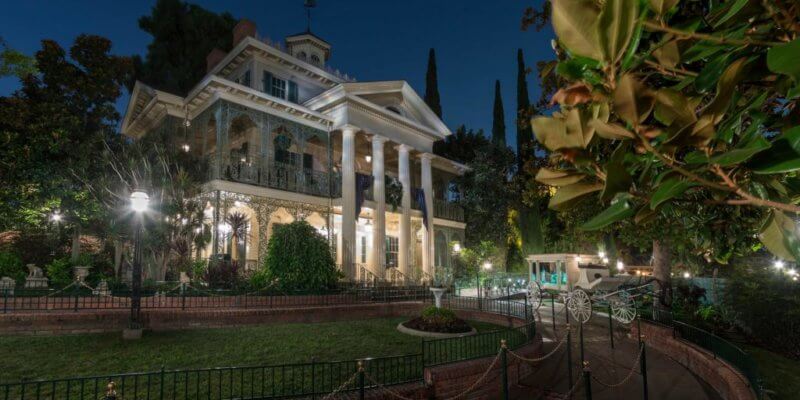 At Disneyland Resort, so many attractions hold a special place in our hearts due to the connection they have with Walt Disney himself. As we know, Walt may have dreamed up the concept of Disneyland and what we have today as multiple Disney Parks around the world, but the only Park that he entered and had a direct hand in creating was Disneyland Park, or as some used to call it, the original “Magic Kingdom”.

Some rides such as Pirates of the Caribbean, Jungle Cruise, “it’s a small world”, and The Haunted Mansion — to name a few — are dearly beloved by Disney fans when they visit, as they can feel the history that has gone through the Park over the past 66 years thanks to Walt Disney. As noted by Disney Wiki, the ride was “Originally conceived in the mid-1950s by Walt Disney as a walk-through ghost house, artist Harper Goff was tapped to conceptually design the attraction. The house originally had a rural American design and was intended to be at the end of a crooked path that led away from Disneyland’s Main Street, U.S.A.. Eventually, the decision was made to place it in New Orleans Square and thus the mansion’s exterior was themed as an antebellum home.”

Other Imagineers such as Rolly Crump helped to create the original but now scrapped idea of the Museum of the Weird, as well as Yale Gracey who thought to use the Pepper’s Ghost effect to create the dancing ballroom scene which reigns as iconic to this day. Even Madame Leota is played by Imagineer Leota Toombs, who Walt hand-picked to play the role. So, as one can imagine, all of these little details strike as important to fans.

Most recently, fans have noticed a change with one very familiar character in the attraction. There are a ton of animatronics in the Haunted Mansion that Guests love, such as the murderous bride, the Hat Box Ghost, the Hitch-Hiking Ghosts, and more. When Guests enter the graveyard, they are met with the gravedigger and his dog, but he now looks like he has aged!

One Redditor noticed the change and commented on it.

When did they add a beard to the Haunted Mansion gravedigger?

I’m not a local to Disneyland so i usually see Haunted Mansion in the fall/winter season when i normally take a vacation, where it’s been done up as Nightmare Before Christmas. i finally got to experience it this week as the original layout and noticed that the gravedigger now has a beard and moustache, whereas he used to be clean-shaven. (i spent too much time as a kid looking through a 1970s souvenir book that had his picture to know he didn’t have a beard before). the beard he’s sporting looks too much like a cheap costume-shop variety, although i don’t mind the overall new look of it.

does anyone know when or why they made the change to his looks? i don’t recall him having the beard when i last saw the non-overlay in 2019, and the previous time to that when i didn’t see the overlay for TNBC was in 1995, when i’m positive he didn’t have a beard then.

When did they add a beard to the Haunted Mansion gravedigger? from Disneyland

It seems that the change happened in April 2021 according to video footage, however, many did not notice. Disney expert and YouTube creator OffHand Disney (@OffHandDisney) shared photos of the change on Twitter.

They really gave the Groundskeeper a beard and I didn’t even notice pic.twitter.com/MxsG0UzywD

Considering the grave digger and groundskeeper of the cemetery site is the only character in The Haunted Mansion to be alive, after so many years, it does make sense to age him slightly! We do not see Disney do this often, but in the case of this character, we can see how it makes sense. Disney did not state that they intended to age the character due to the storyline, however, that is purely speculative on our part!

Creepy Fun for Little Ones
The Haunted Mansion is dark and contains some mildly frightening scenes, but there is no gore. The ghostly residents are friendly and the ride is slow-moving.

Did you notice this change over the past few months?