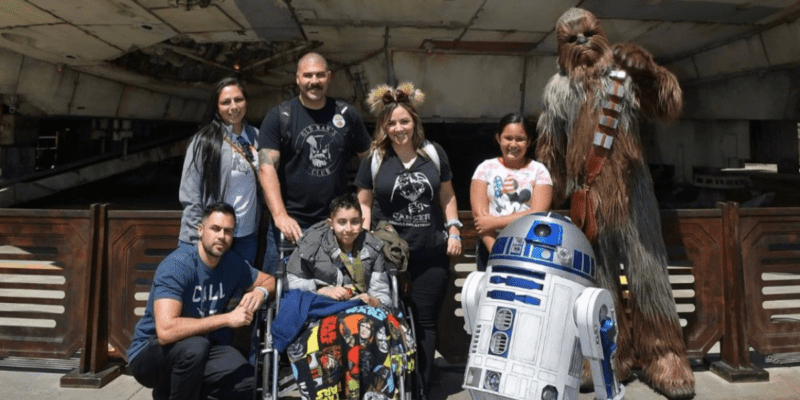 With the expansion of Star Wars: Galaxy’s Edge, Disneyland Resort has received thousands of fans of the Star Wars franchise into this fantastic and highly immersive land.

When Guests visit Star Wars: Galaxy’s Edge, they can experience the meticulously crafted storyline of planet Batuu and interact with Rey, Chewbacca, Vi Moradi, an exclusive character of Galaxy’s Edge, Kylo Ren, and even First Order Stormtroopers. Guests also have the opportunity to take the most amazing photos in the galaxy, as the Millennium Falcon and other ships can be found throughout the land, as well as droids and epic scenery, which all provide incredible photo ops.

With so much to see and do, visiting Star Wars: Galaxy’s Edge is a dream come true for any Star Wars fans. However, the story of one particular Guest and his experience during his travel to Batuu recently melted the hearts of over five million viewers.

In the video posted by @prayers_for_aj on Instagram, we can see Anthony, a 14-year-old cancer warrior and huge fan of the Star Wars franchise, sharing an emotional moment with Chewbacca during a private meet and greet Anthony and his family got to experience.

Anthony’s mother mentions this interaction was part of a visit to Disneyland the family had planned after receiving the devastating news on April 6th that Anthony’s cancer had returned for the third time, saying it would help everyone get some much needed time away from the reality at the happiest place on earth.

You can see the video down below, or click here to watch it.

It is not clear if Chewbacca said anything to the brave youngling, but his body movements and gestures were enough to make the experience memorable and highly emotional. Anthony’s mother comments Chewbacca was absolutely amazing and that everyone could feel the love and empathy he showed that day. She adds she wishes she could personally thank him and all the Cast Members who made this moment possible, telling them what this moment meant for them, as Disneyland Resort has always been their favorite go-to happy place, spending countless hours at the parks creating beautiful memories.

The video has gained 418k likes and 13.1k comments since it was posted, including a pinned comment from Michael K. Holle (@m.holle1979), who is presumably “friends” with Chewbacca, saying that it had been an honor for Chewbacca to know Anthony and that he had not experienced that type of bravery since his old pal Han Solo. Michael added that Wookie will be with Anthony every step of the way and that he is looking forward to the day when Anthony can be his co-pilot, sending him strength and love.

This emotional experience makes us believe that Disneyland Resort truly is the happiest place in the world and that Disney magic is something Guests of all ages can feel when they visit the Parks.

At Disneyland, there is so much for Guests to enjoy! Now that the Main Street Electrical Parade and other nighttime spectaculars have made their way back into the Parks, Guests have so much more to look forward to on their next visit. Walking up to Sleeping Beauty Castle is always a dream, especially when you get to go inside and relive the story of Aurora and Maleficent. Riding classics like “it’s a small world,” Pirates of the Caribbean, Mr. Toad’s Wild Ride, The Haunted Mansion, Matterhorn Bobsleds, Splash Mountain, and more will have you feeling the magic and craving a churro! Toontown is currently gearing up for a massive change which will be revealed in 2023 with the reopening of the land and the debut of Mickey and Minnie’s Runaway Railway.

What do you think of this emotional meet and greet? Let us know in the comments below!