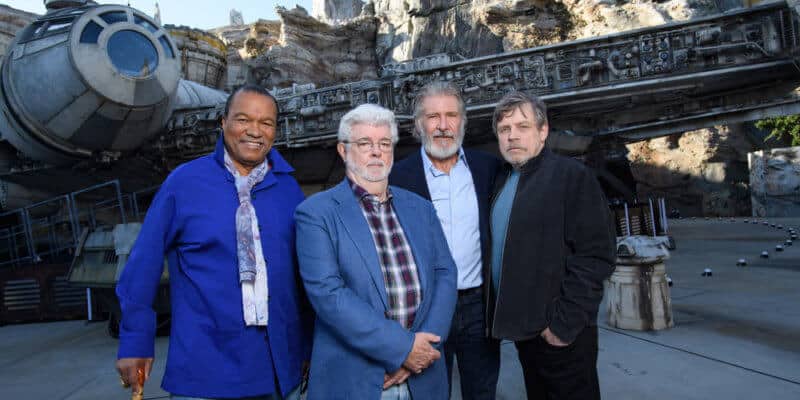 May the 4th is a celebration many fans of the Star Wars franchise look forward to each year, even more so now that Disney Parks are open and more events and celebrations are making their way back to the Parks once again.

Yesterday was a particularly special celebration for Guests at Disneyland Resort, as a fan-favorite event made its triumphant return to the Park.

Disneyland After Dark: Star Wars Nite is a hard-ticketed after-hours event that offers Guests the chance to meet beloved Star Wars characters, many of which can’t usually be seen at the Park, enjoy unique themed food offerings, shop for exclusive event merchandise, have photos taken on special event-themed backdrops, enjoy a Star Wars Fireworks Spectacular and so much more!

Guests enjoy all of this while wearing their finest Star Wars-inspired costumes and apparel and showing off their lightsabers to enjoy the fantastic world created by George Lucas.

Having this in mind, you can imagine the surprise of many Guests and Cast Members when they saw George Lucas hanging out at Star Wars: Galaxy’s Edge at Disneyland on May the 4th. Ashleyy (@disneydayydreamer) posted a video on TikTok where “George” can be seen, seemingly mesmerized as he makes his way through the shops of Galaxy’s Edge, leaving the Cast Members and many Guests with a huge smile as he walks by.

This is definitely the best way to spend Star Wars day, although it sounds too good to be true, right? Well, that’s because, sadly, it is. Many viewers quickly commented that the man in the video was not actually George Lucas but that this Guest did a remarkable job making himself look like him.

TheThemeParkDuo (@thethemeparkduo) posted a video response confirming that the man in the video was not the mind behind the Star Wars universe. The impersonator tricked nearly everyone who saw him during yesterday’s happenings:

When Guests visit Star Wars: Galaxy’s Edge, they can experience the meticulously crafted storyline of planet Batuu. Guests can interact with Rey, Chewbacca, Vi Moradi, an exclusive character of Galaxy’s Edge, Kylo Ren, and even First Order Stormtroopers. Guests also have the opportunity to take the most amazing photos in the galaxy, as the Millennium Falcon and other ships can be found throughout the land, as well as droids and epic scenery, which all provide incredible photo ops.

Plus, at Disneyland, there is so much for Guests to enjoy! Now that the Main Street Electrical Parade and other nighttime spectaculars have made their way back into the Parks, Guests have so much more to look forward to on their next visit. Walking up to Sleeping Beauty Castle is always a dream, especially when you get to go inside and relive the story of Aurora and Maleficent. Riding classics like “it’s a small world,” Pirates of the Caribbean, Mr. Toad’s Wild Ride, The Haunted Mansion, Matterhorn Bobsleds, Splash Mountain, and more will have you feeling the magic and craving a churro! Toontown is currently gearing up for a massive change which will be revealed in 2023 with the reopening of the land and the debut of Mickey and Minnie’s Runaway Railway.

Have you visited Star Wars: Galaxy’s Edge? What has been your favorite experience in Batuu? Let us know in the comments below!