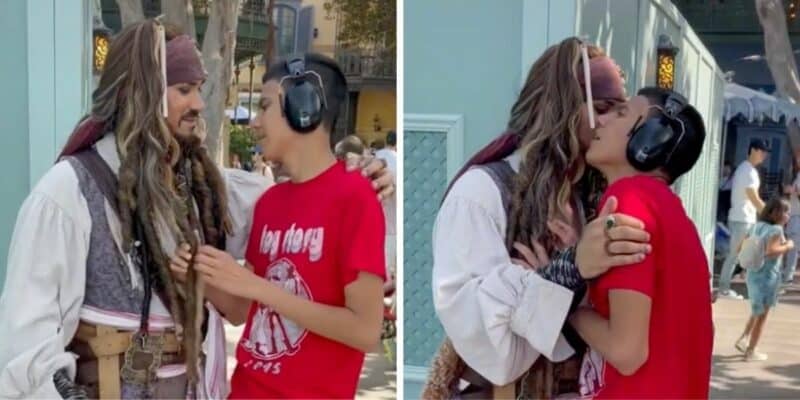 When visiting the Disney Parks, Guests may occasionally run into Jack Sparrow, who can usually be found in Adventureland at Magic Kingdom at Walt Disney World or near the Pirates of the Caribbean attraction in Disneyland Park at Disneyland Resort.

Guests love spotting the Pirates of the Caribbean character as he makes for one-of-a-kind interactions. The witty yet loving pirate usually chats about treasure, the Black Pearl, or, of course, rum. During one sweet character meet and greet, Jack Sparrow was seen comforting a Disney Guest who has autism.

TikTok user @disneymeetsautism shared a video of a Guest with autism meeting Jack Sparrow at Disneyland. The video has since gained 42.1k likes and nearly 600 comments.

In the video, you can see Jack Sparrow hug the Guest and whisper something in his ear before allowing the Guest to touch his hair. Then, Jack Sparrow goes to pose for a photo before asking the videographer what his name was.

You can watch this sweet interaction between Jack Sparrow and Thomas below, or by clicking here.

Have you ever met Jack Sparrow at the Disney Parks? Let us know in the comments below.

If you want to visit Disneyland or Walt Disney World on your next family vacation— but aren’t sure where to begin planning, then don’t hesitate to reach out to our friends over at the Authorized Disney Vacation Planners at Academy Travel for a free quote.