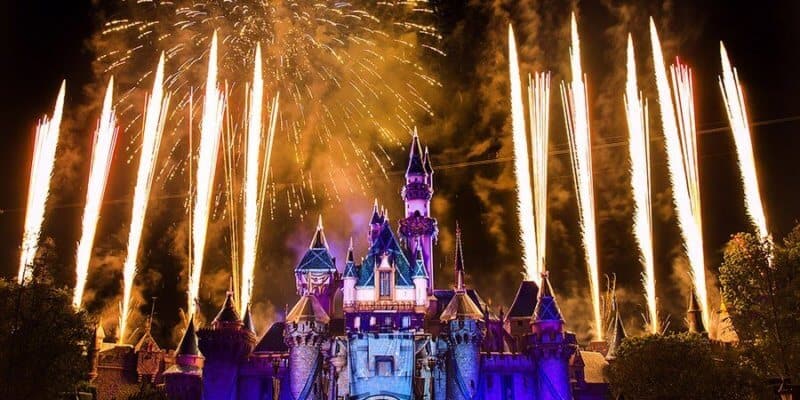 With Fantasmic! on its way back to Disneyland Resort, and the return of  World of Color at Disney California Adventure and the Main Street Electrical Parade and Disneyland Forever fireworks spectacular at Disneyland Park, Guests visiting The Happiest Place On Earth have so much to look forward once the sun goes down at Disneyland!

However, a recent video from an exclusive event in collaboration with Disney has Guests begging for an improvement to the Park’s nighttime spectaculars.

A video posted by David – Disneyland Tips (@thedavidvaughn) shows an impressive drone show set up by Disney above the Los Angeles Skyline. The show consisted of hundreds of drones that lit up the LA sky as they formed Darth Vader’s helmet, the face of Mei from Turning Red (2022), the logo for the new Chip & Dale movie, and the Disney+ logo, among other breathtaking figures and stunts.

As David mentions in his video, it would be amazing to see a show like this come to Disneyland, especially since Disneyland Paris is already doing a similar performance as part of their 30th Anniversary nighttime spectacular. However, no official Disney statements have confirmed or denied a drone show coming to Disneyland Resort.

The show was part of an event called Bundletown, celebrating national streaming day and promoting a new bundle deal by Disney, which offers Guests the chance to subscribe to Disney+, ESPN+, and HULU. You can learn more about it in the video below:

Join us in Bundletown for National Streaming Day. All of this and more, now streaming with The #DisneyBundle.

Join us in Bundletown for National Streaming Day. All of this and more, now streaming with The #DisneyBundle.

And over at Disney California Adventure Park, there is so much to see and do! Guests can enjoy Buena Vista Street as they walk the roads Walt had in Hollywood, enjoy a hand-dipped corn dog at Award Wieners, Head to Cars Land to enjoy the neon signage and Radiator Springs Racers, check out the new Marvel-themed land in Avengers Campus, where they can meet Spider-Man, Loki, Ant-Man, Black Widow, Doctor Strange, and so many more characters. And of course, you have to ride WEB SLINGERS: A Spider-Man Adventure and Guardians of the Galaxy: MISSION BREAKOUT. Rock on the Silly Symphony Swings as well, and catch Jack-Jack on Incredicoaster! The list of rides and attractions never ends!

Would you like to see drones be added in a Disneyland nighttime show? Let us know in the comments below!