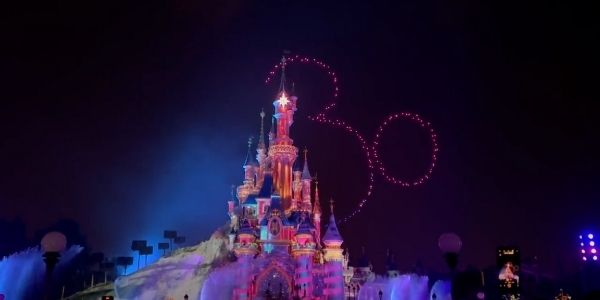 With the new Star Wars: Galactic Starcruiser opening at Disney’s Hollywood Studios, the new TRON roller coaster coming to Magic Kingdom, the Guardians of the Galaxy-themed ride at EPCOT, and the Walt Disney World Resort itself celebrating its 50th anniversary, there has not been a more packed year for the DIsney Parks in a long time.

However, the party is also just getting started internationally as well, with Disneyland Paris’ 30th Anniversary celebrations kicking off right now.

We learned a lot about these events and celebrations a few months ago, even learning Minnie Mouse would be getting a new outfit and now the wait is over as the entire Park is covered in new and exciting decorations, offering Guests some unique experiences as well as delicious food and limited edition merchandise.

One of the most exciting parts of Disneyland Paris’ anniversary celebration was the amazing DIsney D-Light show that would appear on the Sleeping Beauty Castle. We wrote about Disneyland Paris announcing this very exciting show and now, the day has finally come where we get to see it in action.

See the show below in a tweet from DLP Report (@DLPReport) below:

As you can see, the iconic castle is complete;y transformed with lights and colors as well as an amazing display of drones on the side. There is also a special after-show display which you can see below from DLP Report again:

Video: “After Glow”, the #DisneylandParis30 after show surprise brings the party vibes with the dance version of the theme song and innovative 3D drone effects. Fantastic!

✨ Video: “After Glow”, the #DisneylandParis30 after show surprise brings the party vibes with the dance version of the theme song and innovative 3D drone effects. Fantastic! pic.twitter.com/RLa67bRhMj

As you can see, the drone technology used in this show is jaw-dropping-offering Guests a truly special celebration for the Park’s anniversary. The official Disneyland Paris website describes the show as:

D-Light is just one of many new experiences coming to Disneyland Paris for the 30th anniversary. There are also tons of exclusive merchandise opportunities as well as limited-time food options that Guests can try, both of which have garnered huge lines already. Also coming this year is the highly anticipated Avengers Campus expansion, which is inspired by the same land that opened in Disneyland in Southern California last year.