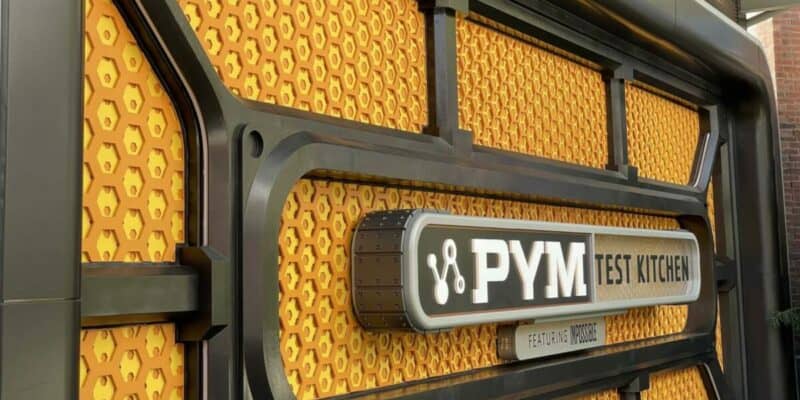 When Avengers Campus opened at Disneyland Resort’s Disney California Adventure Park earlier this year, Marvel fans flocked to the newly opened land to experience the Marvel Cinematic Universe in a Disney Park for the first time.

Now, major progress is being made at Disney’s second Avengers Campus, which is due to open to Guests at Disneyland Paris in 2022.

DLP Report on Twitter shared details about the PYM Test Kitchen and Tasting Lab restaurants, which can also be found at the Anaheim, California version of Avengers Campus:

Finally some visible progress at PYM Kitchen with concrete-style panels installed on the facade (bottom right) and other theming elements being lifted in:

🔧 Finally some visible progress at PYM Kitchen with concrete-style panels installed on the facade (bottom right) and other theming elements being lifted in: pic.twitter.com/XHdMmxBuyn

The official description of the PYM Test Kitchen at Disneyland Resort reads:

On an urgent mission to fight hunger? Head to Pym Test Kitchen for phenomenal food at unusual scales! Utilizing the revolutionary shrink-and-grow technology of Pym Particles, Ant-Man and The Wasp lead a team of research chefs as they pioneer a menu packed with inventive-sized entrees, tiny treats and shareable bites that provide the perfect power-up.

This old lab facility-turned-quick-service restaurant features a seating area and bar amidst décor that incorporates remnants of ongoing experiments—gigantic soda cans, humungous condiment bottles and massive cellphones recycled into menu boards. Stop by to taste-test their latest innovations in food science and conquer uncontrollable appetites on the spot!

Related: Disney Left One BIG Tribute to A Bug’s Land at Avengers Campus

While there is not an exact opening date for the newest Avengers Campus, it is clear that notable construction progress is being made on the MCU-themed land, which will feature many of the same characters that can be found in the California Park, including Iron Man, Loki, Black Panther, Black Widow, Captain America, Hawkeye, and MCU newcomer Kate Bishop.

Related: You Can Explore Disney’s Hotel New York – The Art of Marvel For FREE

In addition to the upcoming addition of Avengers Campus, Disneyland Paris is home to Disney’s only existing Marvel hotel, Disney’s Hotel New York – The Art of Marvel. The official description of the Resort hotel reads:

It is important to note that the Avengers Campus at Disneyland Paris could potentially be the last of these lands, unless one is added at an Asian Disney theme park in the future. Walt Disney World Resort is unable to construct an exact replica of Avengers Campus due to licensing issues with certain Marvel super heroes, such as Spider-Man and The Incredible Hulk.

Are you planning to visit Disney’s new Avengers Campus next year?